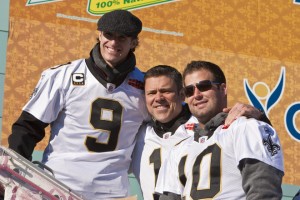 Heard an interesting rumor yesterday about the Steelers when it comes to their 2010 schedule. The team as we know will play the NFC South this season, and with it they will play the Falcons and Panthers at home, and the Saints and Bucs on the road.

So the rumor goes that the Steelers very well may be playing their second straight Thursday night game to start the season, as they may open the season against the NFL Champion Saints. Think about it, the past two Super Bowl champs go at it to start the season – pretty interesting for a nationwide viewing audience.

Last season the Steelers opened up the season at home against the Titans, winning in OT 13-10. The report I heard said another possible opener for the Saints may be the team they beat in the NFC Title Game – the Vikings, who they also have on their home schedule.