Around the North: An interview with Bengals Gab Editor Eric McMackin 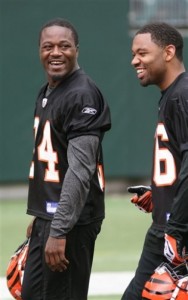 Here at Sports Gab Network, we have a real good staff of writers, and a couple good ones right here in the AFC North. So for the next couple days, we’ll catch up with some of our North bloggers, and today we chat with BengalsGab editor Eric McMackin, as he answers some questions about the Bengals:

1. What grade would you give the Bengals for their offseason to date?

I have to say, this is probably their best offseason performance since the advent of unrestricted free agency 20 years ago. They retained all of their key free agents including DT Tank Johnson, S Roy Williams, and TE Reggie Kelly. In years past they’ve always managed to lose a key player or two and replace them with lesser alternatives. This year, their only losses were by choice, cutting underperforming WR Laverneaus Coles and choosing not to pursue free agent K Shayne Graham. They replaced Coles with Bucs free agent Antonio Bryant, who terrorized the NFC South when healthy, and upgraded the kicker position with Mike Nugent and Dave Rayner. They were aggressive in improving the offense and retaining the entire starting line-up on their fourth-ranked defense. Perhaps most importantly, they re-signed defensive coordinator Mike Zimmer, the architect of such an amazing defensive turnaround.

2. Draft or free agency, what new Bengal are you most excited about?

Plenty to choose from here. I really like what first round TE Jermaine Gresham and 3rd round WR Jordan Shipley could potentially add to the offense, and according to several NFC South observers, Antonio Bryant is a top-flight WR when healthy. Believe it or not though, the player that seems to be garnering the most buzz is WR Matt Jones. The former first-round pick of the Jaguars has freakish size (6-6) and deceptive speed. Carson Palmer recently called him a “mismatch” for both corners and safeties and talked about his reliable hands. Jaguar observers have noted that he finally was starting to put it all together in 2008 before his league suspensions, and he seems hungry and eager to make an impact now and save his career. The former Arkansas QB could also give the team some options in the wildcat formations that are in vogue these days.

3. The team just inked “Pacman” Jones, I thought they were done dealing with troubled players? What impact do you think Jones will have?

The team is clearly not shy about signing troubled players, and any talk of stopping was clearly a fallacy. Besides Pacman, they also signed WR Matt Jones, who spent 2009 out of football due to suspensions and legal issues, plus they drafted Florida DE Carlos Dunlap in round two despite a DUI arrest days before the 2009 SEC title game. Owner Mike Brown likes his reputation as a redeemer, and Marvin Lewis seems to like players who are hungry to prove themselves again. It has worked lately, with RB’s Cedric Benson, Larry Johnson, and Bernard Scott along with DT Tank Johnson all turning the corner in Cincinnati.

As for Pacman, the team already has two quality starting corners in Jonathan Joseph and Leon Hall. They also have a solid punt returner in Quan Cosby, so Pacman’s talents are not a need but a luxury. If Pacman works out, he’ll provide the team with an excellent nickel back and insurance against injuries. If he doesn’t, his veteran minimum contract will be easy to part with. Overall, it was a low-risk, high-reward situation and I for one applaud it.

4. What area of the team improved the most in your opinion this offseason, what area got weaker?

Clearly the position that got the most help was at wide receiver. Chad Ochocinco found himself double, triple, and sometimes quadruple-covered in 2009, with TJ Houshmandzadeh gone to Seattle and the team’s unreliable and thin TE position. Coles was a failure, 2008 second-rounder Jerome Simpson was a bust, and slot man Andre Caldwell was hot-and-cold. When Chris Henry went down with a broken arm in week six, the passing offense essentially evaporated. Knowing this, the team signed Antonio Bryant, Matt Jones and Chris Davis in free agency, and they drafted Texas’ Jordan Shipley in round three and Kansas’ Dez Briscoe in round six. With all those bodies on the roster, the team should be able to find 2 or 3 players that can help Carson Palmer and Chad Ochocinco.

It’s hard to pick an area that got weaker this year, which is a shockingly pleasing development as a fan. As I mentioned they retained all the players worth keeping. Everyone that was sent packing was replaced with players that, frankly, can’t do any worse but can do a lot better.

I think going 6-0 in this division in any year is an amazing accomplishment, and to be frank, the team was lucky to pull it off last year. They really stole the game against Pittsburgh in Cincinnati thanks to some late-game heroics, and both games against Baltimore were hard-fought with the Bengals having the ball bounce their way. Undefeated in the AFC North in 2010 would be nice, but unlikely. More likely would be a sweep of Cleveland and a split with both Baltimore and Pittsburgh. One thing is certain in my view—with the running game and defense the Bengals now have, they’ll compete for the division crown again in 2010.

6. Carson Palmer had a very up and down season a year after he missed a ton of time due to injury, what kind of year do you think he’ll have in 2010?

Assuming Palmer stays healthy, which is always a big “if”, I see him rebounding nicely. With much more talent at both WR and TE, Palmer should have more options. I believe his inconsistency in 2009 had more to do with a change in offensive philosophy and a lack of weapons than Palmer himself. Given the arrivals of Bryant, Jones, Shipley, and Gresham, Palmer should be able to return to his 2005-2006 form, with 3500 yards and 20 or more touchdowns.

7. Sure they won the North, but they didn’t win a playoff game, and haven’t in years…is Marvin Lewis ever going to be on the hot seat? If not, why not?

Steelers fans should know that most Bengals fans feel the team would have won in the playoffs in 2005 had Palmer not gotten injured. Their late-season swoon in 2009 was disappointing, but kicker Shayne Graham was the player most directly responsible for that loss and he’s gone. The fact is that Marvin Lewis has brought 2 division championships, something unheard of since the days of Sam Wyche. He has a winning record as a head coach, and had his program firmly in place. Owner Mike Brown hates change. All of this adds up to Lewis coaching the Bengals as long as he wants to. That said, Lewis is in the final year of his current contract, and has rebuffed the team’s efforts to give him an extension to date. Speculation swirls that he’s looking for more concessions from the team (read: power), and that he’s getting burned out. Some have speculated that after this season, he’ll move to a front office position with Mike Zimmer taking over as coach, ensuring the team doesn’t lose the promising defensive coach to another team.

I personally think he’ll eventually sign an extension and stay on. At any rate as long as the team is “competitive” and makes a playoff appears once every 3 years or so, Lewis can coach the Bengals as long as he wants—for better or worse.