My Top 10 Favorite Steelers of All-Time

More than one person has asked me over the years who my favorite Steelers all-time are. With doing plenty of research for my upcoming book – “100 Things Steelers Fans Should Know & Do Before They Die” (which can be ordered HERE), I have gotten more and more of a fondness for players that maybe in the past I didn’t know all that much about.

With that said, I figured now is as good a time as ever to pop out my personal list of my Top 10 Favorite Steelers of All-Time. Some may shock you, some may upset you, but whatever the case, here goes nothing.

10. LaMarr Woodley – It hasn’t taken long for this former Michigan product to jump on my list. I love his energy, and have an appreciation of his ability of getting to the QB at key times (just ask Kurt Warner and Joe Flacco). With that said, 29 sacks in just three seasons, I hate to think about the Steelers losing this star in the making. Get a deal done, he may be just as if not more important for the future than James Harrison.

9. Jack Lambert – He’s number 13 in my book, his chapter titled – “Count Dracula in Cleats.” You can’t talk about the greatness of past Steeler defenses and not talk about Lambert, who was just so colorful in all the things he did. I think my favorite all-time memory of Lambert was his throw down of Cowboys safety Cliff Harris in Super Bowl X after he mocked Steelers kicker Roy Gerela after a missed field goal. He turned that game around, and the Steelers won 21-17.

“If I was ever in a bar-room brawl and needed one man to go back-to-back with me, I’d want Jack Lambert to be the man,” Joe Greene said of Lambert. “This is one rough, tough guy…someone who’ll never give up.” Yet another reason I loved what he did for the Steelers for many years, and why he’s 9 on my all-time favorite player list.

8. Joey Porter – His mouth and motor never stopped, and for that he’s simply one of my favorites of

the modern Steelers era. Porter ran his mouth again and again, but you know what – more time than not he backed it up. Two games with Porter come to mind, the 05 playoff win in Indy, and then the week after in Denver. Porter was the best defensive player on the field in both those games, making big plays against Peyton Manning and then the next week stripping Jake Plummer to give the Steelers the ball for what was their first TD of the game.

It was tough to see Porter leave after the Super Bowl letdown season of 2006, but the team knew they were left in good hands with James Harrison as well as Woodley. I was in favor of the team taking a look at him when he was let go this past offseason, but in the end wasn’t shocked they didn’t. Despite that, he’s still an all-time favorite.

7. Joe Greene – How could you not love the “Steel Curtain” and what this North Texas State product brought to the team. No doubt, if Greene isn’t drafted, the Steelers do not win four Super Bowls. It’s that simple. He 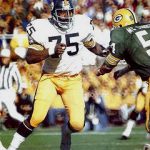 was double and triple teamed at almost all times, and once he was able to use his emotion to knock the snot out of ball carriers and QB’s, Greene was one of the best of all-time at his position.

Greene hated losing, and he let his teammates know about poor play in no uncertain terms. For that, I loved what he brought to the team, and his flat out great play as a Hall of Famer makes him #7 on my favorite all-time list.

6. Jerome Bettis – Watching “The Bus” run over defenders for 10 seasons was a pure pleasure, and it was a storybook ending for Bettis seeing him on that platform in Detroit with the Lombardi trophy. Bettis was a true Steeler at heart, this after he was with the Rams for the first three years of his career. Not only did he embrace the Steel City, but he also gave back to the fans with great play and high emotion.

I was there for Bettis’ last 100+ yard game against the Bears back in 2005, and I will never forget with the snow falling watching him bowl over overrated Bears LB Brian Urlacher for a touchdown that led to a Steelers win. Bettis was a huge reason the team won Super Bowl XL, as they fed off that emotion for that late season and postseason run.

5. Ben Roethlisberger – Let the jokes begin, but you know what, this team doesn’t have six rings right now if Ben Roethlisberger is not a Pittsburgh Steeler. He is a top 5 QB in the NFL, and while I am the first to say I don’t support the crap that he does off the field, or maybe the things he has done or said to people, I love his play. He is guts all the way through, and though I agree with those that say he holds the ball too much, he also makes a lot of plays when most QB’s would have given up.

If he gets his personal affairs in order, and stays out of trouble, he could challenge Terry Bradshaw for most of his QB records. If he wins 1-2 more rings for this club, I am pretty sure that black and gold fans will find it in themselves to forgive him for the mistakes he has made.

4. Hines Ward – While I have a soft spot for the 70’s tandem of Lynn Swann and John Stallworth, you can’t deny what Hines Ward has done in his time as a Steeler. All he’s done is set record after record, and drive other

teams nuts with his smile and ability to make huge plays. Ward is a Hall of Famer, and it’s great to know that unless something totally out of wack happens, he’ll play his whole career as a Steeler.

Ward is another guy that bleeds back and gold, and he gives it back in the community as well as on the field, which is great to see. Right now with the issues with their QB, Ward to me is their team leader, and a guy that puts other players on his shoulder. For that, he’s #4 on my list.

3. Greg Lloyd – Just plain nasty. My favorite defensive Steeler of all-time, this guy was undersized as a linebacker, yet each and every week and each and every play brought it. There was nothing more fun than when they use to mic up Lloyd on gameday and he would talk the most unreal smack at players and even coaches. I loved it. He was good even when the team wasn’t, and watching him look for knockout blows all over the field made watching him a blast.

Lloyd was simply the most intense Steeler I ever had the chance to interview and watch. I know the men of the ‘Steel Curtain’ before him would have words about that, but Lloyd was around at a time when I really got more and more into the team, and therefore he’s number three on my list.

2. Merril Hoge – Yeah, you probably don’t remember him all that much for what he did, but for a short period of time near the end of the Chuck Noll era Hoge was the teams best rusher. He was a 10th round pick in 1987, and while he wasn’t the most gifted back on the team most years, he always wore his heart on his sleeve, which is why he was such a fan favorite.

caught 34 passes as well. Then in the playoffs he had two big games against the Oilers and then almost helped the team upset the eventual AFC Champion Broncos. In both games he went over 100 yards on the ground. In 1990 he ran for a team high 772 yards, and then over 600 again in 1991. Once Bill Cowher came in, Hoge became a blocking back, and played in the Steel City for two more seasons before leaving to go to the Bears.

It was there he suffered a series of concussions that ended his career. He went on to work for ESPN, get and recover from cancer, and remains in the broadcast industry. A great guy on and off the field, Hoge always wore his heart on his sleeve.

O’Donnell’s career numbers with the Steelers saw him have some very productive seasons. When he was given the green light to throw the ball a lot, he put up impressive numbers, not huge numbers, but numbers that put the Steelers in the best position to win. He almost won the 1994 AFC Title Game on his own when the defense and run game let him down, and then in 95 played big in the final minutes of the AFC Championship Game vs the Colts to get the team to the Super Bowl.

O’Donnell’s career saw him hold the NFL record for lowest career interception percentage with 2.11 picks every 100 pass attempts. It was almost cruel that two interceptions defined his career in the Steel City.

He was a good QB at a time when the team went through a bunch of bad to average QB’s for a number of years. He was a quiet team leader that led more by example, and while I was as peeved as anyone for him bailing on the team after the Super Bowl loss, he remains my all-time favorite Steeler.