Scouting the Enemy: #8 in the AFC – Miami Dolphins 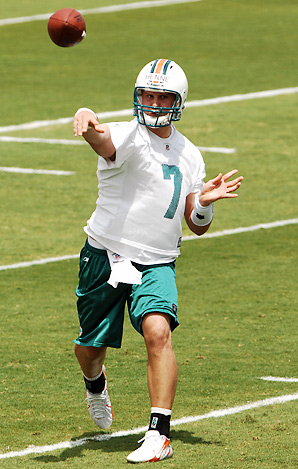 The Good – The Fins added WR Brandon Marshall this offseason, and he should add some spark to a passing game that was average at best last season. Chad Henne is an up and coming QB, and the run game has a good 1-2 punch with Ronnie Brown and Rickey Williams. The defense adds former Cardinal LB Karlos Dansby, who should fit right in with his 109 tackles from a season ago.

The Bad – The team is going through a bit of a change at defense, getting rid of former Steeler Joey Porter and longtime Fin Jason Taylor. There is a lot of pressure on Henne to have a big season, and if Marshall is a problem player, like he has been in the past, the team could have a long season. Brown is another player with pressure on him to have a big year.

Steeler Connection – The Steelers beat the Fins in the regular season finale last season, and they will play again this season, again in Miami, this time a lot earlier on October 24th. It is the 6th game, so Ben Roethlisberger should be back, and possibly could have already played a game by then, so he could be ready to finally have the butterflies out of him.