Kaye Cowher; Wife of Bill Cowher, Passes Away From Cancer at 54 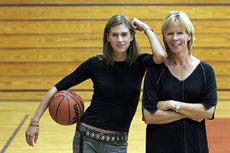 Thoughts and prayers to the Cowher family as well as to Bill and his daughters for the unfortunate and tragic passing of his wife Kaye. The following from the Post Gazette about her passing Friday:

Kaye Cowher, the wife of former Steelers football coach Bill Cowher, died today in her native North Carolina after losing a battle with skin cancer. She was 54.

The Cowhers moved to Raleigh, N.C., during Mr. Cowher’s final season coaching the Steelers, 2006, and continued to make it their home. Mr. Cowher resigned after the 2006 season, his 15th as Steelers head coach.

The Cowhers met when they were classmates at North Carolina State University in 1976. Mr. Cowher was on the football team and Mrs. Cowher, the former Kaye Young, and her twin sister, Faye, played basketball on full scholarships.

The Cowhers have three daughters, Megan, Lauren, and Lindsay, all of whom have been standout basketball players. The oldest two, Meagan and Lauren, played together at Princeton University.

The family has requested privacy and has released no information on Mrs. Cowher’s death. Services will be held in North Carolina on Monday.