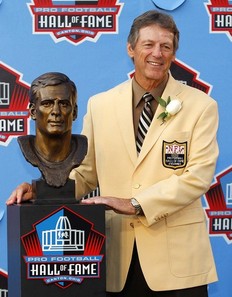 Peter King in his Monday Morning QB talked about Dick LeBeau going into the HOF on Saturday, and a quote from the Steelers D-coordinator was a ‘Quote of the Week’ in his column:

“They’re here tonight, and I’ve got to tell you, that’s about the highest compliment I’ve ever been paid in my life.”

That’s the memorable moment of the weekend. I’ve never seen or heard of an entire team of 80 players — some who don’t know Dick LeBeau — coming to a Hall ceremony, along with a former boss (Dan Rooney) who flew in from Ireland and some former players too. That’s the Steelers.

I couldn’t agree more. I thought LeBeau’s brother did a great job inducting his younger brother, and also Dick himself gave a classy and very thoughtful speech. It gave me goosebumps seeing the Steeler players and coaches with their Terrible Towels waving in Canton.