Ward on Setting Records – Is He a First Ballot HOF? 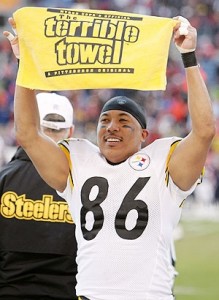 Hines Ward will have a bust in Canton someday, no doubt about it. He is the Steelers all-time leading wide out, and is a former Super Bowl MVP.

He got a taste of Canton on Saturday night when he was there with the team honoring Dick LeBeau, and was asked if he realizes he’s passed both John Stallworth and Lynn Swann in the record books.

“No,” Ward said. “Some of the guys, when we were walking through, said ‘be ready’ but I don’t get into that. For me, it was a compliment to have some of the greatest players in this game tell me how they appreciate the way I play the game. It was a great moment, and to see some of the former Steelers up there, it was a great night.”

So here’s the question today – Is Hines a first ballot Hall of Famer?