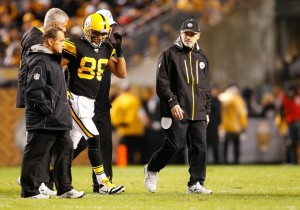 The Steelers offense did little all night vs the Pats till it was garbage time, and one reason was the loss of wide out Hines Ward with a concussion.

Ward says that despite the injury, he will go Sunday when the 6-3 Steelers host the 5-4 Oakland Raiders at Heinz Field.

Ward said he could have gone back in the game, but was prevented from doing so by the Steelers’ medical staff.

“I felt like I could have played but our (doctors) felt otherwise,” Ward said. “It’s my body. I feel like if I want to go back out there I should have the right. They saw me tripping over the grass and the league was going to make a big deal about it, them putting me back out there.”

Ward got hit in the first quarter following what looked to be a a five-yard reception, which was then ruled incomplete.

“I’m a competitor and I want to be out there, especially against the New England Patriots,” Ward said. “I worked my tail off all week to get in that position and I got dinged up.”

Steelers Post Game Quotes after the Loss to New England
Has Reed missed his last kick in Pittsburgh?