Game Twelve: Steelers Take Control of the North with 13-10 Win Over Ravens 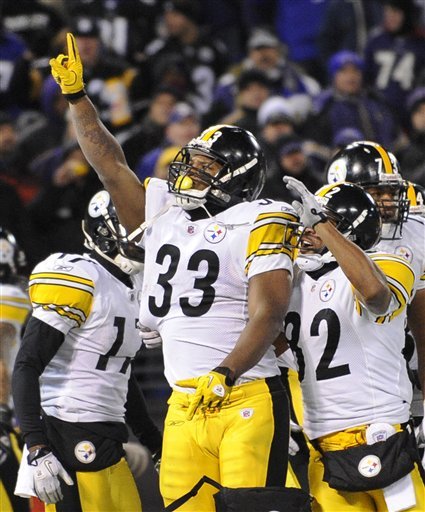 As was expected, points were not easy to come by Sunday night, but it was the Steelers offense that finally found some rhythm in the second half, scoring 13 points as they got them when it counted, holding the Ravens to 3 points in the final 30 minutes.

Troy Polamalu made the biggest play of the night, and maybe the season, as he forced a fumble with a sack of Joe Flacco with 3:13 left, and the loose ball was taken 19 yards by Lamarr Woodley to the Baltimore 9, setting up the Steelers game winning score.

Roethlisberger after two incomplete passes, threw a 9-yard touchdown pass to Isaac Redman with 2:51 for the difference. The Ravens drove to the Steelers 31, but on fourth-and-two, Ravens coach John Harbaugh declined to try a 49-yard field goal for kicker Billy Cundiff, and instead went for a pass play to try and get closer, and the pass to the flat was incomplete, saving the Steelers win.

Say what you want about Roethlisberger, but he hung in against a fierce defense, throwing for 253 yards, most of them coming after his nose was broken by a blow in the first quarter on the teams first possession. He went went 22 for 38 and has won six straight starts against Baltimore and is 8-2 lifetime against the Ravens.

Flacco was 17 for 33 for 266 yards, but his fumble was the most decisive play of the game.

The Steelers lost a couple key players during the game along with the TKO of Roethlisberger. Miller was hit with a cheap shot that should have been a personal foul, and suffered a concussion in the third quarter after the hit from Ravens cornerback Chris Carr. Right tackle Flozell Adams also limped off the field in the third quarter. Punter Daniel Sepulveda hurt his right knee in the second quarter, and placekicker Shaun Suisham was called upon to punt for the remainder of the game.

The Ravens could have taken control in the first half, as they went up 7-0 late in the first quarter. Flacco went 6 for 6 during a 92-yard drive, completing a 61-yarder to Anquan Boldin on a third-and-15 before connecting with Boldin for a 14-yard touchdown.

In the second quarter, Flacco connected with Donte’ Stallworth for a 67-yard completion. The play took Baltimore to the Pittsburgh 27, but a third-down sack took the Ravens out of field goal range. The Steelers held the Ravens run game in check, as Baltimore had 11 yards rushing on 11 attempts in the first half.

The Steelers offense finally got going in the second half, as they got field goal drives to cut it to 10-6, and then Polamalu’s huge play late saved them, as the team finally got the play they needed to put them in a position to win the game.

Rashard Mendenhall had 19 rushes for 45 yards, and Mike Wallace had 5 grabs for 76 yards.

The Steelers start the first of three at home next Sunday, as they host the worst in the AFC North, the Bengals, who have lost 9 straight, including a Monday night loss to the Steelers four weeks ago 27-21.

Game Eleven: Not Easy, But’s it’s a Win – Suisham kicks the Steelers to a 19-16 OT Win over Buffalo
Game Thirteen: Defense Dominates Palmer and the Bengals in 23-7 Win