Game Thirteen: Defense Dominates Palmer and the Bengals in 23-7 Win 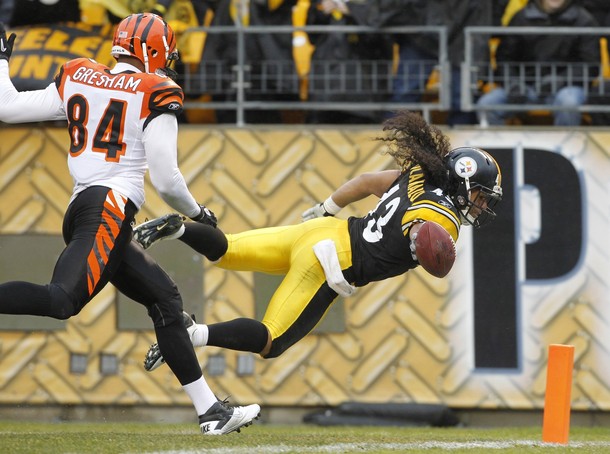 On a day when things didn’t start very good for the 9-3 Steelers, they could not have ended any better.

The black and gold completed a sweep of the very bad Bengals Sunday, winning on the strength of two defensive touchdowns in a 23-7 victory. They trailed 7-0 just over 5 minutes into the game, but dominated from there, as they at one point in the middle of the game the Bengals had six drives that resulted in zero yards on 10 plays.

The Steelers got two interception returns for touchdowns, one from Troy Polamalu that tied the game at seven, and another from LaMarr Woodley that more than sealed the deal in the fourth quarter to make it 20-7 with 12:21 left.

Pittsburgh, now at 10-3, couldn’t get into the end zone on offense despite dominating the time of possession. They outgained the Bengals 314 to 190, and Ben Roethlisberger threw for 258 yards on 21-for-33 passing. His favorite wide out, Hines Ward, had 8 catches for 115 yards. Rashard Mendenhall had 66 yards on 18 carries, as the Steelers ran for 123 yards.

Carson Palmer threw three picks total, and was 20-for-32 for 178 yards. He was also sacked three times. He got the Bengals in the end zone on a nifty 8-play, 69-yard drive that ended with Palmer going to OL Andrew Whitworth for a 1-yard TD to make it 7-0.

The defense was the story though, as they never allowed Cincinnati to do much of anything on offense once they got back in the game, and overall after the first Bengal 69 yard drive they allowed just 121 yards over the last 55 minutes of play.

Next week gets a lot tougher, as the New York Jets come to town for a 4:15pm game at Heinz Field.