When They Needed it Most, Polamalu Makes the Play of the Year 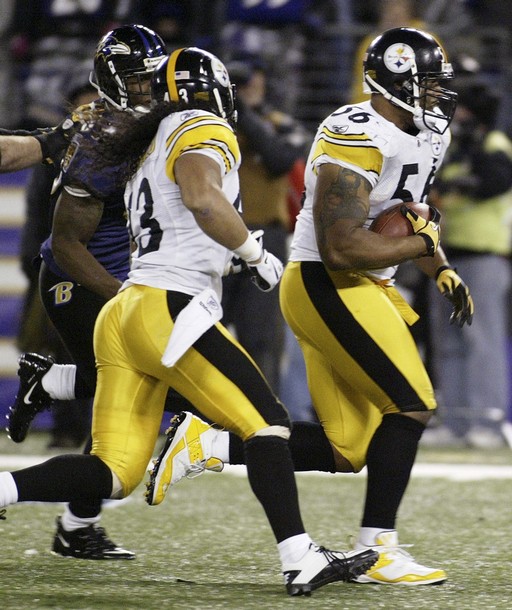 It was the play of the year for the Steelers, and came at a time when they needed it most.

Safety Troy Polamalu slammed into Ravens quarterback Joe Flacco late in the fourth quarter, exploding untouched across the line to cause a fumble that was eventually picked up by LaMarr Woodley, setting up the game-winning score three plays later when Ben Roethlisberger hit Issac Redman with a short pass that Redman took across the goal-line for the score that made it 13-10.

But the play that set up that score was the one that will live in the memory for Steeler fans, as it was the long-haired Polamalu at his finest, throwing his body at Flacco and causing the fumble that saved the Steelers season.

“It was actually a run pressure, we anticipated them to maybe run the football, and we were trying to drop them for a loss, get them off schedule, you know, keep them off schedule,” Mike Tomlin said of the play. “Troy’s [Polamalu] a great player, a lot of guys would go in there and sack the quarterback. He sees the game a little differently, that’s what makes him special. He got the ball out, unfortunately, we weren’t able to get the ball in the endzone, but our offense finished the job for us.”

And that they did, but it looked downright gloomy before the forced fumble by Polamalu. The Ravens had reached their 43 after a short run, an 8-yard pass interference penalty on the Steelers, and a five-yard run by Ray Rice.

It looked like the Ravens were ready to put the game away, ready to take home a 10-6 win and complete control of the division. That’s before Polamalu changed all that.

“The coaches made a great call. I was surprised they were passing in that situation. It was all coached football,” Polamalu said.

It was a play that impressed both sides of the ball for the Steelers. Standing on the sidelines waiting for a chance to win the game, the offense was hoping for a shot, and they got it with Polamalu’s huge hit and strip.

“That’s what Troy does. He always comes through with great plays at the right time. The defense was playing hard and tough all day. We came with pressure, and it was a matter of time before we got a turnover, and we did,” Rashard Mendenhall said. “We were able to get the ball on the 10-yard line, and we had to put points on the board at that point.”

And they did. It took a couple heart stopping plays, but eventually they got the score they had been waiting for all day. But it couldn’t have come unless the teams wild man made the play that could go down as the biggest on the way to playing football well into January.