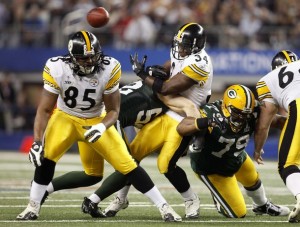 The Steelers in the second half seemed to have it all going their way.

They had pulled within 21-17, were getting pressure on Aaron Rodgers and stopping the Packers offense, and seemed to be on the verge of scoring to take the lead early in the fourth quarter.

They had turned the ball over twice earlier in the game, but the third and final turnover, this time a fumble by Rashard Mendenhall, stopped the Steelers cold.

It came as the Steelers were on the Green Bay 33 on the first play of the fourth quarter as many Steeler fans in Dallas were starting to feel good about the teams ability to do what they wanted to vs Green Bay.

On the first play of the period the ball was suddenly out of his hands courtesy of a timely hit from Packers all-pro linebacker Clay Matthews, basically knocking away with it the Steelers’ chances of staging one of the NFL title game’s biggest comebacks in Super Bowl history.

For Mendenhall, the mistake could not have come at a worse time. “It hurts; it’s tough. But we did it to ourselves,” the back said after rushing 14 times for 63 yards, including a touchdown.

It seemed that Mendenhall was able to have way rushing through the Packers D for the most part. Mendenhall had 30 yards on eight carries before halftime, and added a 17-yard run to Green Bay’s 33 in the third quarter, and then a TD run four plays later which finished off a 50-yard drive to make it 21-17.

“A lot of the plays, we were taking to the edge,” said Mendenhall. “But we did a pretty good job of running the ball.”

While that was the case, it was the fumble that will stick out in fans memories as the play that in the end stopped the best chance the Steelers had to take the lead away from Green Bay.

Just another sad reminder of the mistakes made in a game that could have easily turned out different.