Big Plays Nowhere to Be Found on the Big Stage 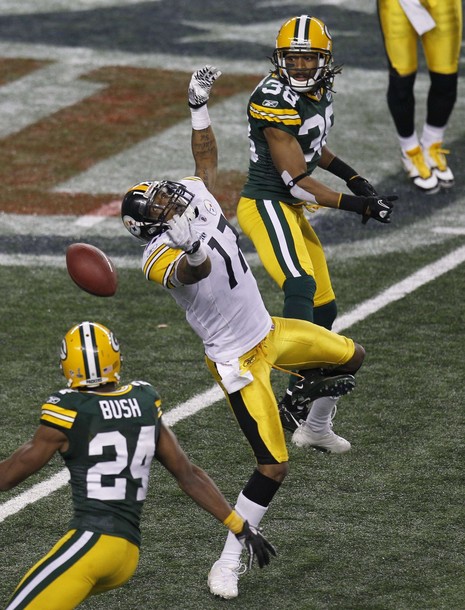 For a Steelers team that always seemed to be able to get the big plays when needed the most, Sunday was clearly not one of their better days.

The names that fans are use to hearing when the game is on the line coming up with a tackle, sack, fumble, touchdown were silent, and it resulted in a Packers 31-25 Super Bowl win that will haunt the Steelers till training camp kicks off in six plus months.

James Harrison made a few plays, but in the end never got a strip sack of MVP Aaron Rodgers, or a pick dropping in coverage like that of Super Bowl XLIII in Tampa.

“We were just trying to make a play in any of the three phases to win the football game,” Mike Tomlin said.

On defense, the club that thrived on getting turnovers and forcing mistakes couldn’t salvage any. While they were able to hold the Packers down for a portion of the game, the bottom line is they still scored 24 points on offense, too many in a game against a defense that was into playing lights out.

“They (Green Bay) were huge today. They made a lot of plays on defense,” James Farrior said after the loss. “We were unfortunate on defense not to get any turnovers. We left a lot of plays out there. We need to help our offense get the chance to score.”

And that they did not. The only real chance the Steelers had was a fumble on the first punt of the game inside the Packers 20. They didn’t get the ball, and that was the best shot they had.

One player who really didn’t show up the entire postseason was Troy Polamalu. The safety who was named the AP Defensive Player of the Year last week was nowhere to be found. When he did have a shot to make a play, like on the TD pass to Greg Jennings, the stick he put on him was not enough to jar the ball loose.

“I don’t know, I had some opportunities to make some plays, I was just off a step here or there,” Polamalu said.

That could be said of the entire postseason for the safety, who missed played all over the field.

On offense, the team was running the ball well, but decided to get pass happy, and never hit the big downfield play like in the regular season.

Mike Wallace did have a nice TD catch that drew the Steelers to within 28-25 after the two-point conversion. Overall the game plan seemed to be lots of wide out screens, and never at one point did Wallace break one of the screens.

“I’m just running the plays, whatever they call. The guys were pressing,” Wallace said. “They had a safety over the top, so I had to try and get something past them, some deep ball. Things just didn’t work out for us today.”

Wallace didn’t do much in the big play department this postseason, and like Polamalu, seemed to have points during the three postseason where he was nowhere to be found.

Another player on offense who needed to play better was QB Ben Roethlisberger. Missing passes early, throwing two picks, and in the end having a shot to win the game and not coming through was something you were not expecting from the franchise QB.

Even Wallace admitted that Roethlisberger, for whatever reason, was not at his best on the game biggest stage.

“Some games you have good games, some games not as good. So I guess it was just one of those games,” Wallace said. “I think he fought hard all the way to the end and did what he could, but he didn’t look sharp.”

Neither did a number of Steelers playmakers, which is why the team suffered their second Super Bowl loss in eight tries.