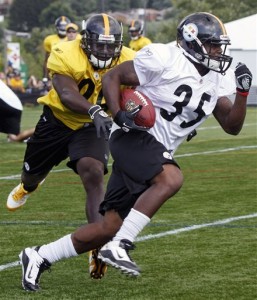 The battle for the Washington Redskins’ starting quarterback job moves from the practice field into game conditions on Friday, when the Burgundy and Gold hosts the defending AFC champion Pittsburgh Steelers at FedEx Field in the preseason opener for both teams.

After ending Donovan McNabb’s short-lived and unsuccessful tenure in Washington by trading the unhappy veteran to Minnesota just prior to the start of training camp, the Redskins are staging an open competition at quarterback between two unlikely candidates, journeyman Rex Grossman and seldom-used fifth-year pro John Beck.

Beck, who hasn’t thrown a pass in an NFL regular-season contest since making four starts as a rookie with Miami in 2007, had been considered the favorite entering camp, but may not get a chance to prove his worth early on because of a recent groin injury that has the BYU product questionable to play on Friday.

Grossman, Washington’s starter for the final three weeks of last year’s turbulent 6-10 campaign, is expected to operate the first-team offense against the Steelers. If Beck is indeed held out, free-agent pickup Kellen Clemens would be next in line for snaps as the ex-Jet tries to throw his name into the mix.

Quarterback isn’t the only position being contested as the Redskins embark upon their second season under head coach Mike Shanahan. Ryan Torain will be attempting to hold off newcomers Tim Hightower and Roy Helu and remain the team’s starting running back, while incumbent Graham Gano faces a challenge from newly-signed veteran Shayne Graham at the kicker’s spot.

With Torain presently sidelined with a broken hand, Hightower is in line to draw the starting assignment in the opener. The Virginia native was acquired by Washington in a July 31 trade with Arizona after spending his first three seasons with the Cardinals.

Helu is one of several rookies whom Redskins fans will get their first look at, a list that includes defensive end Jarvis Jenkins (2nd Round, Clemson), wide receivers Leonard Hankerson (3rd Round, Miami-Florida) and Niles Paul (5th Round, Nebraska) and running back Evan Royster (6th Round, Penn State).

It’s unclear as to whether Washington’s top 2011 draft choice, Purdue outside linebacker Ryan Kerrigan, will be making his debut, however. The converted defensive end sustained a bone bruise in his knee early on in camp and has just begun getting up to speed.

The Redskins’ defense also figures to be without two other projected starters, with safeties LaRon Landry and Oshiomogho Atogwe dealing with Achilles and hamstring injuries, respectively.

Pittsburgh enters this preseason with far less drama than the previous summer, when the well-publicized suspension of quarterback Ben Roethlisberger was by far the team’s biggest storyline. The standout signal-caller should see sporadic action at the beginning of this contest before giving way to backup Byron Leftwich, with grizzled vet Charlie Batch and youngster Dennis Dixon later beginning their battle to stick as the No. 3 man during the second half.

The Steelers may hold out a number of key contributors to last year’s AFC title run, with reigning NFL Defensive Player of the Year Troy Polamalu (Achilles) and All-Pro outside linebacker James Harrison (back) topping the list of potential candidates to sit.

The Redskins have won 13 of 18 preseason tilts against the Steelers, with the teams also playing to a 10-10 tie in 1972. Washington was a 17-13 victor in the most recent bout in the series, which took place at FedEx Field in 2009.