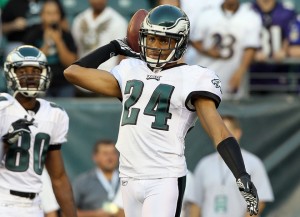 The names are impressive.

Tonight the Steelers host Philly in preseason game number two, a game that will feature the starters playing a half, and it will be the first time that the home crowd will get to see the Steelers since they shut the door on the Jets in the AFC Title game enroute to Super Bowl XLV.

Forget for a minute about the fact the Steelers are matching up with maybe the best team in the NFC, they themselves have to get back on track. The black and gold looked flat out lethargic in a 16-7 loss to Washington last Friday in the preseason opener.

The defense couldn’t get off the field, as they allowed 452 yards of total offense. The offense wasn’t much better, converting just 2 of 11 third downs. “That was a wake-up call and it’s time to start playing football,” defensive tackle Chris Hoke said. “I don’t think anybody was happy with the way they played on Friday night.”

A couple of big names will return to the lineup tonight for the Steelers, as stars James Harrison and Troy Polamalu will both be back in the lineup for the first time in 2011. The duo sat out the preseason opener for precautionary reasons. They’re fresh and ready to test themselves at full speed.

Polamalu and the rest of the starters will play between 20-25 snaps, which should give the Steelers plenty of face time with Philadelphia quarterback Michael Vick.

The Steelers will try to shut up the so-called “dream team” tonight, as they look to even their mark at 1-1 on the season. More importantly, they have to play better.

“Those guys can deal with the limelight and the pressure of calling themselves the ‘Dream Team’ and that’s a lot of pressure, but when you have the guys that they have together, why not?” Ryan Clark said. “They probably have the most exciting quarterback in football, cornerbacks you can play all over the field man-to-man. Why not be excited about that? Why not accept that pressure? As for us, you can’t pay attention to that. We’re just going to keep going about our work.”