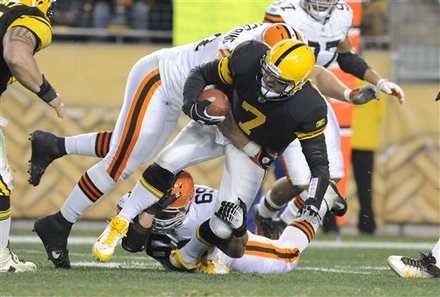 The Steelers Man of Steel is at it again, as it sounds more and more like quarterback Ben Roethlisberger will go against the Niners tonight against the 49ers.

Gerry Dulac of the Post-Gazette is reporting that the decision to start Big Ben was made after he showed enough in practice Saturday to get out there and play with his high ankle sprain.

The decision had nothing to do with the Ravens choke job in San Diego which now determines that if the Steelers can win their last three games, they will clinch home-field in the postseason in the AFC.

Roehtlisberger has a Grade 1 ankle sprain and didn’t practice all week until Saturday, and even then on a limited basis, but he will be in the lineup with Charlie Batch on standby as the backup if Roehtlisberger at somepoint goes down during the contest.