Ward Does it Right; Announces He’s Retiring as a Steeler 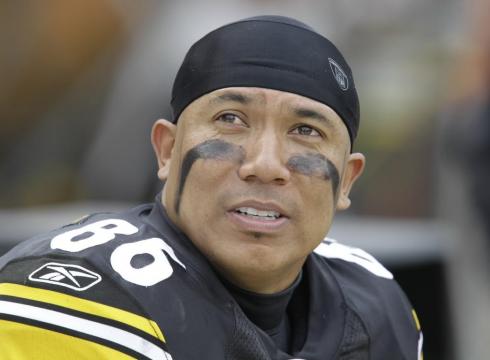 A move that probably was the right thing in the long run, Hines Ward today announced he is retiring from the NFL.

“I am truly blessed. I have accomplished all I have set out for and more,” Ward said.

“There’s only one thing I love more than the game and that’s Steeler Nation,” Ward said, as tears came to his eyes. “It is truly amazing.

“I don’t want to play in any other uniform. Black and gold runs deep in me, and I will remain a Steeler for life.”

Ward was scheduled to make $4 million in 2012. He was released by the Steelers earlier this offseason after a lot of back and forth about playing and wanting to stay with the Steelers.

The 14-year veteran receiver is coming off a season in which he finished with 46 receptions for 381 yards and two touchdowns, the lowest totals in each category since he was a rookie in 1998.

Ward’s role within the offense went downhill in hurry as Antonio Brown and Emmanuel Sanders passed him on the depth chart and Mike Wallace became a Pro Bowler.

It’s a tough move for Ward, but the right move, and instead of forcing his way onto another roster, he did it the right way by saying good-bye as a Steeler.

Has Mendenhall Had His Last Carry with the Steelers?
Video: Hines Ward’s Retirement Press Conference