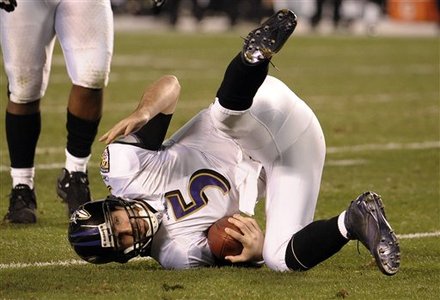 Ray Rice is yet another Raven that likes to come up with excuses. This time he’s speaking out for his fellow loudmouth QB – Joe Flacco, who as we all know seems to think he’s the best QB in the NFL (insert punchline here).

Flacco is looking for a new deal and in an interview with 790 The Zone in Atlanta, Rice says that Flacco should get the deal – this based on the QB outplaying future Hall of Famer Tom Brady in the AFC Title Game.

“It was his show. It was his show on offense and as much credit that I was getting and as much respect I was getting from defenses, all Joe really had to do is prove that we can drive the ball down the field and score, and he did that,” Rice said in the interview. “Quite frankly, he outplayed Tom Brady the last game. He outplayed Tom Brady, and Tom Brady — he’s the trademark for a quarterback. So Joe Flacco feeling the way he feels is only right, because he did it on a high level. He did it on the peak of his performance.”

The Ravens and Flacco have not come to terms as of yet. Then again, what exactly is the “best QB in the NFL” worth these days? I’m sure Flacco will come up with an amount that he feels is worth it, and his buddy Rice will probably back him up on it.