Wallace Report Not True; Has Not Inked a New Deal 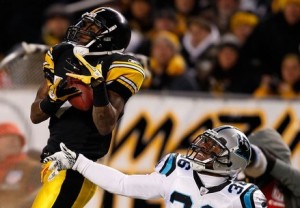 That’s what jumping the gun will do.

Earlier today we jumped on the story tweeted out by Jim Wexell who stated that Channel 11 in Pittsburgh is stating that the Steelers and speedy WR Mike Wallace have agreed on a deal that will keep him in the Steel City for five years.

Wexell has since come out stating that he was duped, and that indeed the story isn’t true.

So while the two sides remain in talks, I wouldn’t get too excited yet that Wallace will get any type of deal done with the Steelers in time for him to be in camp.

When the story breaks FOR REAL – we will get on it!