Clark and Woodley Both May Sit vs Giants; Mendenhall to Start Workouts 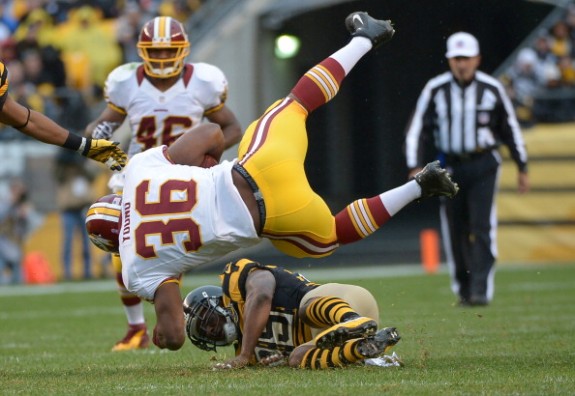 As what seems to be the case each week with the Steelers, there’s good news as well as bad news when it comes to the injury front as the team starts to look ahead to the New York Giants Sunday.

Mike Tomlin stated today he’s not sure if safety Ryan Clark, or LB LaMarr Woodley will be able to play against the defending Super Bowl champs in New Jersey.

Clark sustained a concussion against the Redskins and he will have to undergo tests to get cleared to play in the contest.

Woodley aggravated a right hamstring injury against the Redskins. It’s the same injury that stopped him from playing on the road against the Titans back on October 11th.

Tomlin said Woodley’s injury “looks more promising” than the hamstring injury sustained by backup linebacker Stevenson Sylvester, whom he said is “questionable” to play against the Giants.

As far as Pro Bowl safety Troy Polamalu goes, he won’t play vs the Giants, and right tackle Marcus Gilbert will miss his third consecutive game with an ankle injury.

In the good news department, running back Rashard Mendenhall has been cleared to begin individual workouts. If he can recover, he could wind up playing vs New York.

Jonathan Dwyer, who again went over 100 yards vs Washington, would get the start if Mendenhall and Issac Redmen can’t go.