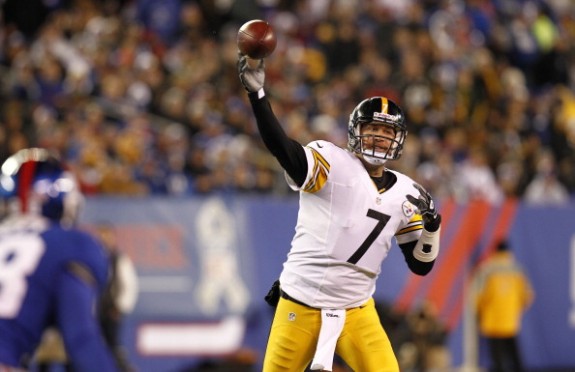 Tonight the Steelers play what many are calling a “slam dunk” as they take on the 1-7 KC Chiefs at home on Monday Night Football. Consider this quick fact – the last time the Steelers lost a home Monday night game? Chuck Noll was the coach in his final season with the team, and they fell to the NY Giants 23-20 in 1991.

With that little fact shared, here’s our preview and prediction for tonight’s game.

1. Don’t Horse Around – The Chiefs are awful on defense, and as long as the offense does what it’s done the past few weeks in this winning streak, this ought to be an easy win. If Todd Haley decides to try to put a knife in his former team and turn it by doing things outside the box, he could find himself in trouble. The Steelers have the better players on both sides of the ball, and should be able to dominate with the run as well as the pass game.

2. Keep Charles In Check – Jammal Charles is the best player of the Chiefs offense (forget Dwayne Bowe) and he can break off a big gain in seconds. He’s put up 634 yards, and the Chiefs average 149.9 yards per game and have a per-carry average of 4.7 yards, the best in the game. If they are going to pull off the upset, they are going to have to run, run, and run more. The Steelers have shown signs of some struggle in the run D earlier this year, and have to make sure not to let it happen tonight.

3. Turnover City – The Chiefs are simply awful when it comes to turnovers, and that includes the guy that will take the ball from under center tonight, Matt Cassel. KC has already lost 15 fumbles, and that puts them at an NFL-high 29 turnovers. Cassel has thrown 11 picks and has also lost seven fumbles. If the Steelers can put any type of pressure on him, he’ll give it up, which should result in short fields or even a score or two for the Steelers.

Prediction – Ok, deep breath. The last time a game looked this easy, the Steelers lost to the Titans on the final play of the game. Won’t happen. At home, on Monday night, with some rain and a crowd that loves their team, the Steelers should be able to dominate the Chiefs, who are lining up for the first overall pick in the 2013 NFL Draft. Look for the run game to gouge the Chiefs, and for the offense to have a fun night with the Chiefs stumbling to 1-8. Pittsburgh 35 Kansas City 14