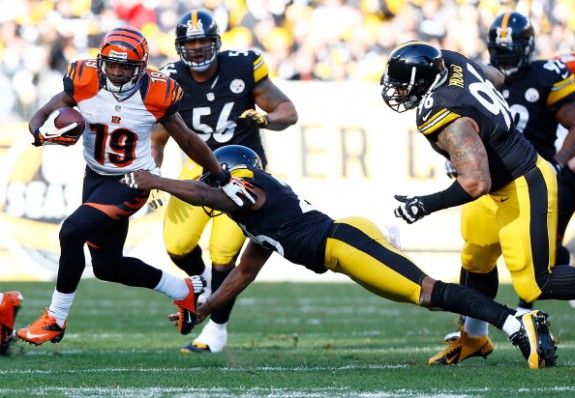 A season filled with mistakes came to a head Sunday, as a pick thrown by Ben Roethlisberger with 14 seconds left followed up by an eventual Bengals field goal was enough for a Cincinnati 13-10 win at Heinz Field.

The loss puts the Steelers at 7-8, and makes next weeks home finale vs the Cleveland Browns worthless.

Roethlisberger and the Steelers had their chances, as they had the ball twice in the last two minutes, and both times were short in trying to get the Steelers into field goal range for Shaun Suisham, who earlier Sunday missed from 24 yards.

One time they did line up Suisham for a field goal from 54 yards out, but the Steelers kicker was short by about two yards.

The second time, Roethlisberger was picked by Reggie Nelson, was advanced the ball to the Steelers 45. Andy Dalton then hit A.J. Green for a 21-yard gain, setting up Josh Brown with 8 seconds left for a 43-yard field goal, which was good.

Roethlisberger again didn’t play all that well, going 14-for-28 for 220 yards with one score and a pair of picks. The first pick came in the first quarter, and was returned 17 yards for a score by Leon Hall.

The Steelers trailed 10-0 with just over a minute left in the first half when Roethlisberger hit Antonio Brown with a 60-yard touchdown to make it a 10-7 game at the half.

Both teams had little success on offense in the fourth quarter, as the Bengals got close enough for Brown to try a 56-yard field goal, which was short.

The Steelers then got a 12-yard run by Rashard Mendenhall to the Cincy 42, but then a four-yard run, two loss, and a scramble by Roethlisberger to the Bengals 36 set up Susiham to try a 53-yard field goal, which was short.

Dalton on the day was 24-for-41 for 278 yards with no touchdowns and two picks. Green, who was held to one catch in the last game between the two teams, caught 10 passes for 116 yards.

The Steelers have lost three straight, and since their OT win over the Chiefs on November 12th, they have lost five of six, with the only win being in Baltimore over the Ravens.

The team rounds out the season with plenty of questions as they take on Cleveland next week, and then will watch the postseason from the outside looking in.

Bengals at Steelers Week 16 Inactives
Video: Ben Roethlisberger in the Locker Room After Losing to Cincinnati