The Next Four Weeks – Can The Steelers Turn Around 2013? 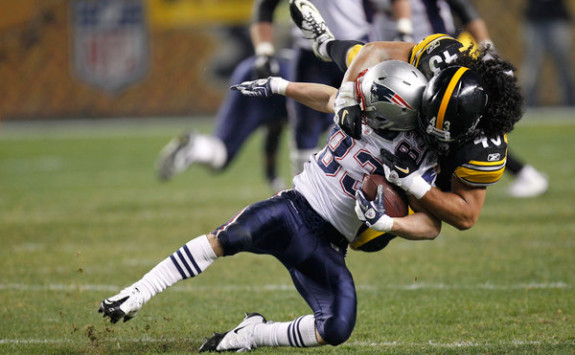 The Steelers will return from the bye week in seven days, and will start it against another team that has had their struggles in the New York Jets.

The Black and Gold are 0-4, and have a long way to go in order to get back on track. If there’s one thing that is a positive thus far in 2013 is that the division flat out appears to stink.

The Browns will wake up Sunday in first place. Yes, the always awful Cleveland Browns, which should tell you how bad the division looks (Cleveland is 3-2, but lost QB Brian Hoyer for the season Thursday night).

So with the Steelers three games out of first, here’s a quick breakdown of the next few weeks if the Steelers are going to get some wins.

10/13 at NY Jets – New York has a rookie QB in Geno Smith, and all that bravado from coach Rex Ryan from seasons past is long gone. Bilal Powell is their leading rusher, while Smith has shown flashes of both good and bad in his first four games. At 2-2 he’s thrown four TD’s and 8 picks in four games, which should help out the Steelers in possibly getting their first turnover of 2013 next weekend.

10/20 vs Ravens – This isn’t the Ravens of last season, or the season before. They are very beatable, as shown last week in a home loss to – yes, the Bills. Joe ‘overpaid’ Flacco has thrown 5 TD’s and 7 picks in for games. He and their offense has been pretty average, while the defense isn’t the intimidating unit it has been. Again, a winnable game if the Steelers can get some things straightened out.

10/27 at Raiders – At 1-3 the Steelers may be seeing former Bucs QB Josh Freeman in a few weeks, as the Raiders are in their usual mode of being a mess, and trying to fix it with other teams problems. Oakland is giving up plenty of points, and their offense isn’t very good either. Here’s the problem, they always seem to lose in Oakland, which is a streak maybe they can end in 2013.

11/3 at New England – Yikes. The way the Pats are playing and the Steelers have played, this could be an ugly affair. Tom Brady and the Pats actually struggled with the Steelers in Pittsburgh the last time around a few years back, and you know they will want revenge this time around. Let’s hope the Steelers can find a way to keep it close, get some turnovers, and pull it out late. This one won’t be easy.

Deal For Brown Shows Steelers Are Trying To Fix The Problem
Video: Ryan Clark – Steelers Will Make The Playoffs In 2013