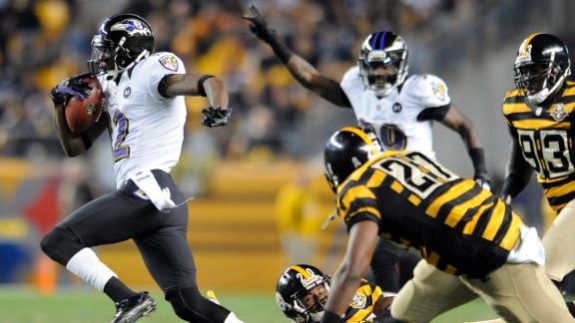 The Steelers are a few days away from their first win of 2013, and already the sights have turned to a bitter enemy in the Baltimore Ravens.

Last week the Ravens lost their second home game of the year in falling to the Packers, and are just 3-3 as they try and defend their Super Bowl title.

While beating the Jets was a great start, if the Steelers can beat the Ravens Sunday, their season could quickly get really back on track.

Here’s a quick look and scouting report on the Ravens and what’s going on in Baltimore.

1. Ravens Can’t Seem To Run – Despite having a four-time Pro Bowl back in Ray Rice, the Ravens again vs the Packers couldn’t seem to get anything going on the ground. “We would love to run the ball better,” Rice said. “It’s not something that you plan on, going out there and messing up. The run game has to get better.” The Steelers held the Jets in check, and if they wanna get to Joe Flacco and keep the Ravens from putting up many points, they can’t let that Ravens ground game get going at all.

2. Jones Back A Plus – The Ravens last week got kick returner Jacoby Jones back, and he had an impact in the 19-17 loss, putting up an 11-yard touchdown pass, and he returned four kickoffs for 102 yards and had a long return of 35 yards. Last season he was a huge factor in the game in Pittsburgh, taking back a kick for a score that gave the Ravens a lead they would not give up. The Steelers special teams has to show up big Sunday.

3. They Can Be Run On – While the Ravens can’t seem to run, the Packers beat them up and Eddie Lacy had a great game on the ground for the Pack. Lacy went for 120 rushing yards on 23 carries, which included a 37-yard run on the second play of the game. The Steelers didn’t do a lot on the ground vs the Jets, but if they want to keep Flacco off the field and beat the Ravens up front, running the ball with some attitude would help.