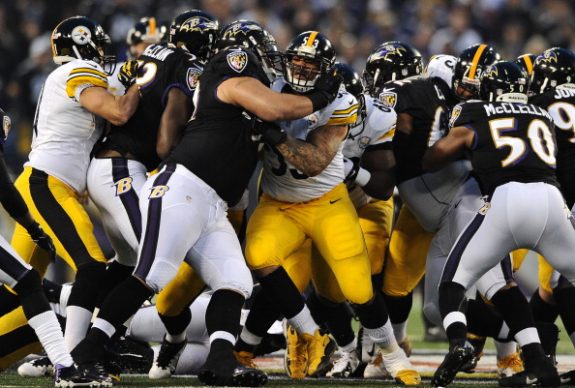 Today we chat with Drew Goldfarb, who is the editor at one of our sister sites – BaltimoreGridironReport.com – about the Ravens, this Sunday’s game, and his prediction for the game vs the Steelers.

1. The Ravens are ranked 27th in rushing, yet have one of the better backs in the league in Ray Rice. What’s been the major problem in the run game this season for the Ravens?

The Ravens have struggled mightily at running the ball effectively and efficiently this year. They are averaging less than 3 yards per carry, which is embarrassing considering they have two very capable backs and the best fullback in the league. The problem lies within the offensive line, which has yet to fully gel as a unit. Also, new run game coordinator Juan Castillo uses the zone-blocking scheme, which the offensive line has yet to grasp. Harbaugh has talked about changing schemes and that the team isn’t tied to any philosophy. Finally, Rice has been dealing with a nagging hip injury and that too, has hampered his abilities.

2. Just how big of a hit did the D take this offseason with losing Ray Lewis, Paul Kruger, and others? Is the unit in a rebuild/transition mode in 2013?

A lot of people like to point to the defensive losses from this offseason, when Lewis retired, and key contributors Kruger, Ed Reed, and Dannell Ellerbee all left for free agency, and say that this defense will regress. However, I would say this unit has the potential to be much better than last years because they are younger, faster and more talented. They have a much better pass rush then they have had in the past few years, which has proven to be a big game changer. I’d say all those losses from the offseason affected the defense’s continuity, leadership, and communication, but this defense has the talent to be great. They showed that with last week’s performance against the Packers.

3. Joe Flacco has had some tough games in 2013, how much is it his fault, and do you think the Super Bowl hoopla, and new huge deal have him almost unfocused?

I’d actually say that Flacco is more focused than ever. He has new weapons and he is in a slightly different playbook with Jim Caldwell being the coordinator for a fully year now, so he has had to put in extra work. He has had some bad games, but I don’t think Flacco deserves the brunt of the blame. Yes, he has thrown some bad interceptions and is inaccurate at times, but it is hard for him to be accurate when he is always running away from pass rushers. This offensive line has held back Flacco from having a big year. He has taken a serious beating this year. Also, with his go-to target Dennis Pitta being out, he has struggled to take advantage of the middle of the field with the lack of weapons around him. Give Flacco time to throw and he will continue to make big plays.

4. John Harbaugh says Jacoby Jones will have a bigger role in the offense, do you think he can be a big part of the teams offense Sunday?

I absolutely expect Jones to have a big role in the offense this week. In limited snaps last week he made two big plays, and his speed on the outside is an asset. He is also great in open space and is able to turn short passes into big gains. Jones is a big play weapon that this team needs to help compliment Torrey Smith, who has been getting bracketed for the past few weeks.

5. Final score prediction and why

Neither team has been playing particularly well coming into this game, but I fully expect a classic Ravens vs. Steelers game. These teams don’t like each other, and even though the Steelers have had a lot of problems so far this season, I know they will be at their best at home this Sunday against their archrivals. I do think, though, that the Ravens just have better matchups across the board and will be able to bring constant pressure on Roethlisberger. The Ravens offense will be able to put up just enough points to get it done and steal a road win against their division foe.

Steelers Vs. Ravens: Three Players To Watch From Baltimore
Building From Within