Steelers Vs. Ravens: Three Players To Watch From Baltimore 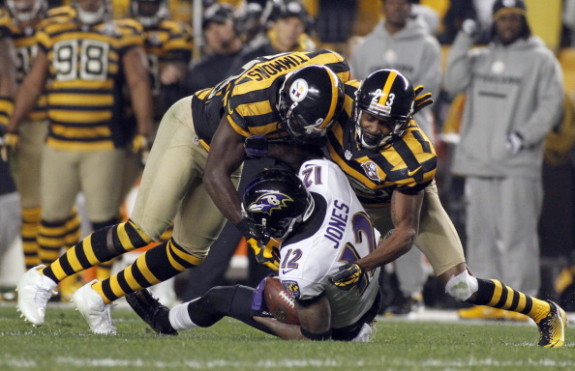 The Ravens and Steelers have a long, storied history when it comes to battling for bragging rights in the AFC North. This season both teams seem down, but that doesn’t stop either team from wanting this win badly on Sunday.

It’s a huge game for both, with the Ravens being 3-3 and the Steelers trying to get back in the AFC North race currently at 1-4.

Today we look at three players to keep an eye on for the Ravens as they enter Heinz Field Sunday afternoon.

1. Jacoby Jones KR/WR – The Ravens kick returner is back, and last season all Steeler fans will remember the punt he took back 63 yards for a score that put the Ravens up for good in the November matchup at Heinz Field. Look for Jones to have not only an impact trying to take back a kick, but also he is expected to have a bigger role in the Ravens passing game. The Steelers can’t lose sight of him.

2. Bernard Pierce RB – Ray Rice hasn’t been getting it done for the Ravens in 2013, so the team hasn’t been shy about going to Pierce, a bigger running back that can grind out yards. Pierce has rushed for 206 yards with two scores, but is only putting up 2.8 yards per carry. The Steelers run D is worse than the passing D, so expect both Pierce and Rice to see carries, but it could be Pierce with more of an impact for the Ravens.

3. Arthur Jones DE – He’s somewhat of a forgotten man for the Ravens on their D-line, but he’s been impressive, going off for 18 tackles this season, but three sacks. He’s done a nice job putting pressure on QB’s this season, and with the issues on the Steelers offensive line, Jones and Terrell Suggs are two players the Steelers have to make sure to block and not let get loose Sunday.