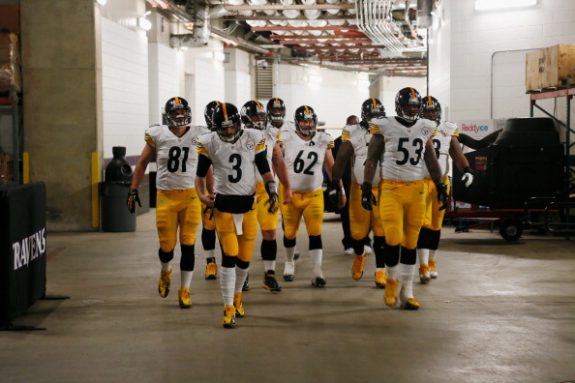 Let’s face it, the Steelers are just not a good team this year and they haven’t been for a while now.

Injuries have plagued this team so far this season, especially on the offensive line. Are catalyst on the line Markuice Pouncey is lost for the season, Levi Brown, a former first round pick who we just picked up via trade from Arizona was just placed on IR, David Decastro virtually is playing his rookie season because he was lost for the season last year and Mike Adams cannot seem to block anything which is why he is not seeing playing time.

The defense just cannot produce turnovers. Although they rank in the top 10 as a total defense, they just are not making those game changing turnover opportunities which we are accustomed to seeing.

This past Sunday they recorded their first turnover of the season (Thank god!). Ryan Clark intercepted Geno Smith in the red zone and late in the game Lawrence Timmons also recorded an interception which was caused by heavy pressure up the middle from rookie first round pick Jarvis Jones.

Overall as a defensive unit, they played stout. Hey, this is a start, finally we are seeing game changing plays out of a top notch defense. But let’s not live in fantasy land here, the Steelers have some tough road games coming, not to mention the fact they have a showdown this weekend with a familiar foe, the Baltimore Ravens.

The Ravens are coming off a tough loss to the Packers at home and are going to be hungry coming into Pittsburgh against a very vulnerable team. After their home game against the Ravens, the Steelers pack up and are on the road for the next two weeks.

First they will travel to Oakland to play the Raiders in Week 8. Traveling cross country to the west coast never bodes well for a team that resides in the East, especially the Steelers who have really never played well in Oakland, dating back to the 70’s and 80’s.

The Steelers last two stints in Oakland have resulted in losses, most recently last year and back in 2006. Oakland has surprised some people this year with how well they have been playing.

Terrelle Pryor beat out Matt Flynn for the starting job this season (no surprise there), and has really made strides and has become bright spot for that organization. Oakland is 2-1 this year at home and will look to add to that win column against Pittsburgh.

Next, Pittsburgh will play the Patriots at Fox Borough, which is never an easy task. Although the Patriots are catching the injury bug with Pro Bowlers Rob Gronkowski, Vince Wilfork, and as of today Jerrod Mayo, they still have one of the best coaching/quarterback combos in the league.

As long as the Patriots have Tom Brady leading the charge and Bill Belichick calling the shots, New England will always be a playoff contender.

Not to mention the fact that Brady is seemingly untouchable at home, he once won 31 consecutive games, which is an NFL record and has always seemed too played the Steelers well. This will be yet again be another tough road test for this struggling Pittsburgh team.

If it’s Big Ben and the offense rifting with offensive coordinator Todd Haley, Mike Tomlin taking away clubhouse games and complaining about somersaults into the end zone, the defense not producing turnovers, or the mass amount of injuries that have plagued the team this season, Pittsburgh is just not a playoff caliber team.

Sunday was a start with a win over the Jets, but have some really tough games coming up. Let’s see if the Steelers can ride this wave of momentum and salvage what has become a laughable season thus far.

Tomlin Says No More Somersaulting Into The End Zone For Steelers
Steelers Vs. Ravens: Three Players To Watch From Baltimore