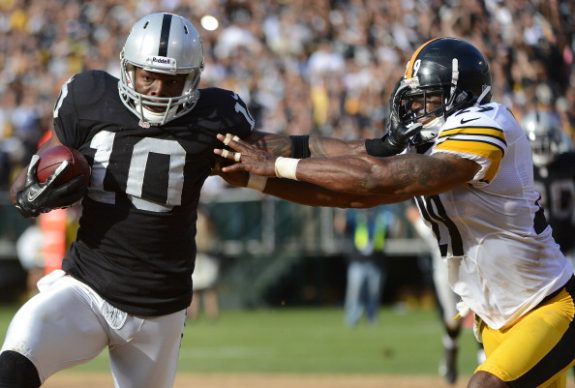 Two weeks ago the season appeared over for the Steelers, as they were 0-4 and going nowhere fast.

Two games later, and the Steelers are still in last in the AFC North, but now are 2-4, and starting it appears to turn the corner in the division and the AFC.

This week they take on the Oakland Raiders, a team that is just like the Steelers are 2-4 but are coming off a bye week.

The Steelers have had major issues in Oakland the last few years, and today we take a quick look and scouting report on the Raiders and what’s going on in Oakland.

1. The Bye Blues For the Raiders – Consider the following, the Raiders have lost their last 10 first games after a bye. Wow. Oh, and by the way, they lost those 10 games by a combined score of 271-139. Wow again. You would have to think that Oakland is going to do whatever they can to change their awful game after bye stats on Sunday, and that means the Steelers have to be ready for the silver and black to take chances and maybe run some very different looks. Why not, they have nothing to lose the way they have played after a week off.

2. Banged Up O-Line – You think the Steelers offensive line has its problems? Consider the Raiders. Center Stefen Wisniewski (knee), center/left guard Andre Gurode (knee), right tackle Tony Pashos (groin/hip) and left tackle Menelik Watson (calf) were all victims of either being out before, or taken out during the teams last game in the loss to the Chiefs. The Steelers defense needs to put pressure on Terrelle Pryor, and with a number of the Raiders starting OL hurting, it could be a big day for the defense.

3. New Look D In Oakland – Do you know who Jason Tarver is? Well, not many people do, but he’s the Raiders young and very aggressive defensive coordinator, and he has Oakland’s defense playing quicker and more aggressively than in a number of years. He had to remake the D on the fly, and so far in six games the Raiders have the 13th ranked defense in the NFL, 10th against the run. They have confused QB’s like Phillip Rivers and Alex Smith in recent weeks, and after 25 sacks last season, they are on pace for 43 this season. It’s a D the Steelers have to watch out for.