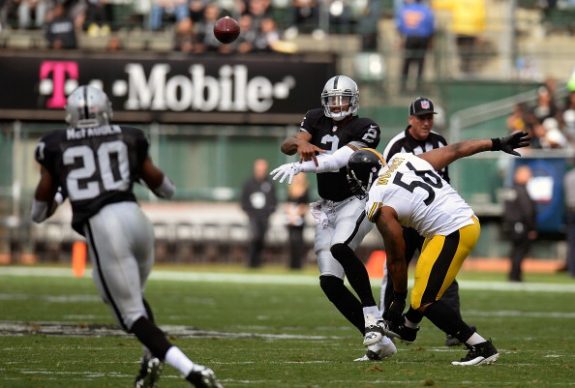 Coming off back to back wins, the Steelers looked like they were on their way to a midseason turnaround and restore some credibility in the NFL.  If there had been any sort of momentum prior to Sundays game against the Raiders, it has now been completely lost.  Although the Steelers had won two games in a row, most fans would agree that this Steelers team is far from playoff contention.

With a must win matchup in Oakland, the Steelers looked to keep that flickering light of hope for the 2013 season burning.  Almost immediately Terrelle Pryor and the Oakland Raiders extinguished that light of hope and even went as far as snapping the candle in half and threw it into the “Black Hole” of the Oakland Coliseum.

Missed opportunities,  inconsistency,  and the all too familiar injury bug led to one of the worst offensive performances of the season (and there have been some bad ones).  Ben was sacked 5 times and was under pressure the entire game.  Receivers dropped passes, including a crucial 3rd down pass to Antonio Brown late in the game.  Ben looked desperate at times and made several plays that left fans scratching their heads. Even time management was an issue in the final minutes of the game.  Just a terrible outing once again by the offensive unit. Grade: D-

With a record setting 93 yard touchdown run by Terrelle Pryor on the first play of the game for Oakland, the defense was embarrassed and forced the Pittsburgh offense to play from behind just secondsninto the game.  Statistically,  the defense played a respectable game.  Troy Polamalu and Cortez Allen each had interceptions and Brett Keisel added a fumble recovery.  You can look at the defensive outing in two ways.  You can look at the positives and look at the stats or you can look at the film and see the little mistakes that ultimately resulted in two additional rushing touchdowns by Darren McFadden.  Hard to be impressed by stats when the scoreboard favors the opponent. Grade: B-

Another blocked punt, and two missed field goals that would have completely changed the outcome of the game.  It is hard to watch a special teams unit have such a negative impact on a game, but after watching the games so far this season, its hard to be surprised about anything.  It will be shocking if Zoltan Mesko remains the Steelers punter for the remainder of the season. Grade: F

It pains to watch this years Steelers team.  Going into the season, not too many people knew what to expect, but how many people thought it would be THIS bad?!  Sugar coating the performance of this team would be a disgrace to the overall product of the NFL.  Steeler fans need to be ready for some major changes in the offseason.  Not only the record, but the way they perform shows a lot about this franchise right now.  Yes, they still have talent but how can anyone be safe on a team that has continously performed the way they have?

Video: Dulac And Bouchette Talk About The Steelers Loss To Oakland
Not Doing The Little Things