Todd: Mesko Won’t Be The Punter For Steelers Sunday 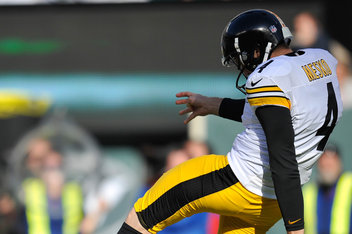 As we talked about on Monday, the growing thought is that punter Zoltan Mesko, who was brought in right before the season, won’t be the punter when the Steelers play his old team the Patriots on Sunday.

David Todd from 970 ESPN in Pittsburgh stated as much today on Twitter.

I don't expect Zoltan Mesko to be the #Steelers punter on Sunday.

Mesko is making $540,000 this season, and was brought in to take over for Drew Butler, who was released in what was a shocking move before the opener vs the Titans.

It remains to be seen if he will be on the roster when Sunday comes along after Sunday’s bobbled punt that was blocked in the 21-18 loss to the Raiders.