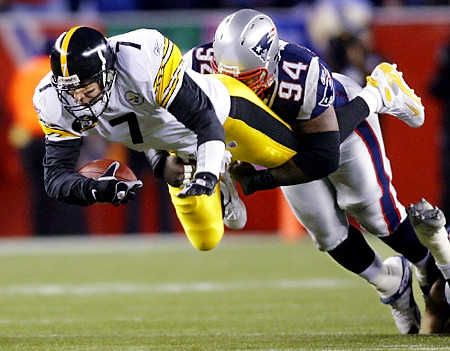 The Steelers and Patriots will do battle this week as the 2-5 Steelers try to land an upset over the Pats, who are 6-2 and nearly a touchdown favorite.

Whenever you play the Pats, it always starts with Tom Brady, the future Hall of Fame QB who has been a huge thorn in the side of the Steelers in his career.

Today we take a look at the Patriots, and what they are all about as the Steelers get set to play them on the road this Sunday.

1. Tom Terrific Vs Steelers – If you are wondering just how good Tom Brady has been against the Steelers, consider that the 36-year-old is 6-2 against Pittsburgh in his career, including a 2-0 mark at home. He’s been fantastic vs the Steelers, throwing 16 touchdowns against three interceptions in those eight meetings while averaging 275 yards passing a game. Forget the fact of who he’s throwing to, he’s been fantastic, and once again the Steelers #1 enemy on Sunday will be Brady.

2. Pats Second Half Sensational – Since the 2010 season, the Patriots are a combined 23-1 in the second half of the regular season. In both 2010 and 2011, the Patriots were 8- 0 in the second half of the regular season and last year the Patriots were 7-1. The Patriots are an NFL-best 35-13 (.729) in the month of November since 2001. In other words, the Pats appear to be better late than early, which is why if the Steelers want to be in this game with a few minutes left, they had better score early and not get behind by much.

3. Red Zone Delight – New England’s offense has shown marked improvement in red zone production over the last three games, a big reason why they are 6-2. Through the first five weeks of the season, the Pats made 17 trips to the red zone and scored six touchdowns (35.3% touchdown conversion rate). In its last three games, the Patriots offense has made 11 trips to the red zone and scored eight touchdowns (72.3% touchdown conversion rate). Overall in 2013, New England is 24-for-28 inside the 20, with 14 touchdowns and 10 field goals. The Steelers need to halt the Pats in their red zone tracks.

Video: ESPN’s Scott Brown On The Steelers Getting Set For New England
Caption This: Patriots Coach Bill Belichick Gets Set For Halloween