Could Polamalu Be Playing His Final Eight Games With The Steelers?

He’s been the face of the Steelers defense for nearly the last decade, but based on performance and amount owed, there’s a decent chance that Steelers fans could be forced to trade in their #43 jerseys in about two months.

Yes, the clock is ticking on the Steelers career of safety Troy Polamalu, a player that has made a career of wrecking plays and coming up with big plays at big times.

Despite playing in every game this season, the team will have a very tough decision to make on Polamalu once the 2013 season is over, and the final eight weeks could go a long way in making that decision.

The 16th overall pick of the 2003 draft may wind up following the footsteps of now Bengals LB James Harrison, who went into last offseason with question marks about his return.

He was given an option of coming back, but only if would take a pay cut, which he declined to do, and therefore the team ended up releasing him.

When Polamalu inked a four-year deal worth $36.5 million in September 2011, he felt he would retire as a Steeler. “I am happy to say that I will retire a Pittsburgh Steeler” was the tweet that Polamalu declared on the day he inked the deal.

Now, in 2013, there’s major question marks about what players may be on the chopping block, and the safety may be one of them if he doesn’t take a cut in pay.

Polamalu has had injury issues the last few seasons, and is set to make $8.25 million next season and may have to take a cut in pay just like the one that was offered to Harrison.

Once next season kicks off, Polamalu will be 33 years old, and right now with a season of disaster in progress, there’s going to be plenty of questions on what big changes the team will have to make.

One would think that based on who he is as a person Polamalu would take the cut in pay to stay with the Steelers, but it’s not a for sure that he will even be given that offer.

The team may just look to try to revamp and rebuild, and if that’s truly the case, one has to wonder if there’s going to be room for a 33-year-old making over $8 million on a roster of a team that just isn’t winning consistently.

Polamalu at this point isn’t ready to talk about the future, but one has to wonder if the writing is on the wall.

“How I feel now is irrelevant,” Polamalu said. “What matters now is whether we turn it around or not. We can’t really tell until the end of the season. (So), it’s not time to look at hindsight. We’re only halfway through the season. I’ll have a lot of time whenever I’m done playing to look back on how every season went, but now is not the time.” 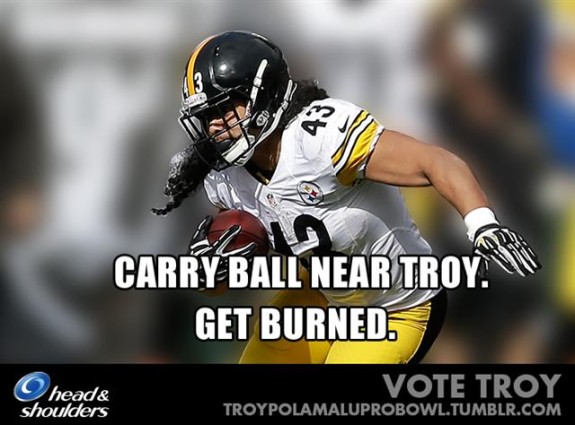