What Can The Steelers Do To Try And Limit Lions WR Calvin Johnson? 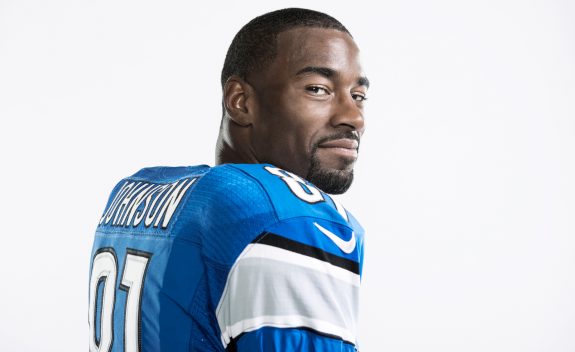 Sunday the Steelers will have to take on by all accounts the best wide out in the game today in Lions WR Calvin Johnson.

All Johnson has done this season is pile up 53 catches for 904 yards and nine touchdowns and put up near historic numbers a few weeks back vs the Cowboys.

So how do the Steelers stop Johnson? Health could be a factor, as he missed a second day of practice on Thursday, but is expected to play Sunday.

Here’s three ways the Steelers can help and hopefully limit the man they call ‘Megatron.’

1. Pressure Matthew Stafford – Last week the defense rebounded off that awful game against the Pats with a solid effort against the Bills and rookie QB E.J. Manuel. They didn’t pound Manuel, but made him hurry throws, as well as use his feet a lot, which isn’t much in Stafford’s game plan. If they can collapse the pocket early and often, it will help stop getting those throws to Johnson.

2. Safety Help – Both Ryan Clark and Troy Polamalu have to keep an eye on Johnson, as not many corners can cover Johnson one-on-one, and that includes Ike Taylor. Hopefully Polamalu and Clark can help out Ike, and that will also have to do with the first reason which is trying to get to Stafford to make sure he doesn’t have a lot of time to get the ball to Johnson.

3. Be Physical – Taylor has to be tough with Johnson, who loves to try and out-physical the corners he plays. This is a test to challenge Johnson early and often, trying to frustrate him with being physical in that five-yard cushion corners have. If Johnson is having issues with his knees, this may help distract him from making those key plays that could do the Steelers in Sunday.