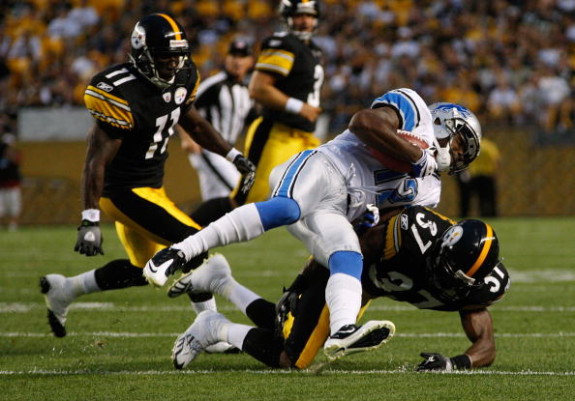 Last week the Steelers got on track for the first time in a few weeks with a win over the Bills, and now with a 3-6 mark turn their attention to the Detroit Lions, a team they have not faced in the regular season since 2010.

The Lions are 6-3, and lead the NFC North, but have suffered a couple losses and have had some huge comebacks over the past few weeks to win games.

A win and suddenly even at 4-6 the Steelers are in a race for the 2nd wild card in the AFC. A loss and let’s face it, the season may as well be over.

Here’s our official game preview with our prediction below.

1. Keep An Eye On Reggie – Lions RB Reggie Bush has added a new dimension to the Lions offense in 2013, and the Steelers seem well aware of it. “As far as his ability to make guys miss, I think it’s LaDainian-like,” safety Ryan Clark said. The Steelers have to spy on Bush, as not only is his running a threat, he’s even more dangerous out of the backfield making catches. Don’t let this guy get going.

2. Ben Needs To Make Quick Decisions – All too often we see Big Ben running around in the backfield trying to make plays, sometimes he makes them, sometimes it’s a disaster. The Lions have maybe the best front-four the Steelers have played all season, and Ben can’t just sit back and there and wait for something to happen, he’s got to make quick decisions, and not allow players like Suh, Farley and Levy to get in and beat him up.

3. Time to Be Special – The Steelers special teams nearly got lose a few weeks ago vs the Ravens, and again last week vs the Bills. In a game that appears to be close and something that needs to give the Steelers the edge, special teams might be it. Antonio Brown or whoever gets the ball in the air needs to find a way to give the Steelers a spark, and against the Lions it will mean a lot if they can make a huge play.

Prediction: Such a tough game to call, the Steelers all season long have had moments to step up and make something happen, and yet haven’t done it. Sunday vs the Lions, it’s really all the marbles. At 3-6 if they get a win, the team can scratch and claw into the race and look forward to the Browns next week. A loss and at 3-7 you might as well get ready for golf season. Something tells me that Big Ben is going to play inspired after all the talk of him wanting a trade last week, and I think this team has enough fight to stop a Lions team that might still be a little too high after a win in Chicago Last week. Pittsburgh 20 Detroit 17

Video: CBS Week 11 Preview – Lions At Steelers
Video: Will Polamalu Be Cut After The 2013 Season?