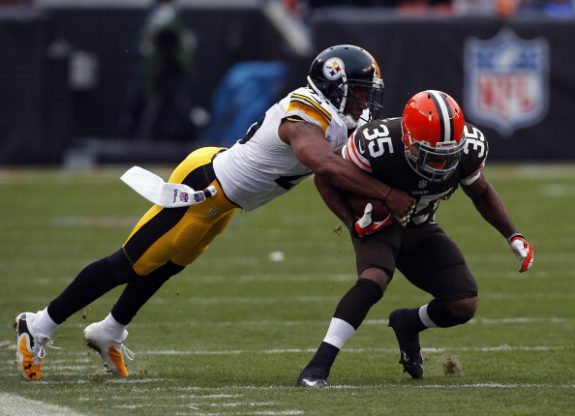 The Steelers defense has officially hit its stride again, as Sunday in Cleveland they beat the rival Browns up and down the field, walking away with a dominating 27-11 win.

The victory was the third in a row for the Steelers, who suddenly have found themselves back in the race in the playoff chase for the final wild card spot.

The club is now 5-6, and with a matchup coming up on Thanksgiving night against the Ravens, suddenly the Steelers look like a team that will need to be dealt with again.

The Steelers played a clean game, keeping Ben Roethlisberger upright all afternoon, allowing him to throw for 217 yards and a pair of touchdowns.

The defense knocked Browns starter Jason Campbell, as in the third quarter William Gay came unblocked on a blitz, and crushed Campbell.

The ball came out, and Will Allen picked it up and got it to the Browns four before being tripped up. Roethlisberger hit Emmanuel Sanders for a score to put the game away with 7:43 to play in the third quarter.

The defense never let the Browns get close, and they put it away for good in the fourth quarter when backup QB Brandon Weeden threw a pick six to Willie Gay for a 21-yard score to make it 27-3.

Playing in a harsh wind and cold temps during the day didn’t seem to stop the red-hot Steelers D, as they knocked around the Browns all day.

Cleveland’s only points came when Billy Cundiff kicked a 49-yard field goal midway through the first quarter with the Steelers up at the time 3-0.

Roethlisberger put the Steelers up for good on a 41-yard TD throw to Antonio Brown with 2:43 left in the first half to make it 10-3.

They pushed it to 13-3 after a strip by Troy Polamalu gave the Steelers the ball back around midfield in the final seconds of the half.

It was the most dominating effort of the year for a Steelers D that seems to finally have it all going their way.

Their next test – Thanksgiving night against a Ravens team that they beat earlier this season at home.