Another Late Letdown Sends Steelers To 34-28 Loss To Miami 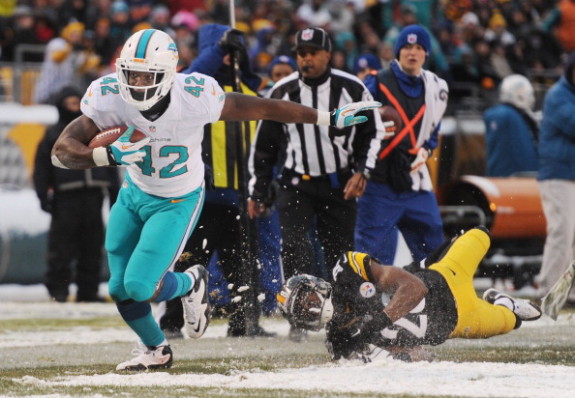 Last season the Steelers playoff march officially ended with one week left in the regular season. A year later, it might as well be over with three weeks left.

This after another tough to swallow loss, 34-28 to the Dolphins on a day that featured snow and yet more missed chances for the 2013 Steelers.

The loss should for all purposes put to rest the thought of this underachieving team making it to the postseason, as back to back losses to the Ravens and Fins have stopped that chatter.

This loss could be placed squarely on a defense that again had a shot to put the game away, but allowed a 55-yard run to Dolphins back Daniel Thomas which opened the door for a score to put Miami up for good.

Tight end Charles Clay pulled in two scores, including the game-winner when he broke free from both Troy Polamalu and Cortez Allen for a 12-yard score to make it 31-28 Fins with 2:53 left.

Everyone will talk about the final play scramble which saw nearly a miracle play by Antonio Brown on a lateral as he raced in for what looked to be a score, but he stepped out of bounds at the Dolphins 11 to end the game.

It should never have come to that, as on a day when it looked like a perfect day for “Steelers Football” the Steelers failed yet again.

They trailed 17-7 before rallying for two scores to go up 21-17, but then the D again gave the score right back when Clay pulled in a long pass and then Ryan Tannehill threw a four-yard pass to Brian Hartline to make it 24-21.

The Steelers made it 28-24 as they again drove down the field, with Ben Roethlisberger hitting passes, the last one to Jerricho Cotchery for a 16-yard score to make it 28-24 just four seconds into the fourth quarter.

The defense though couldn’t stop the Fins, and in the end the loss puts the club at 5-8 with three games left to play.

It’s another letdown, and one that sadly has become just another Sunday in the forgettable 2013 season.

Steelers Gab 2013 Week 14 NFL Preview – Miami At Pittsburgh
Tomlin Talks On The Loss To Miami: “Not Enough Playmaking For Us”