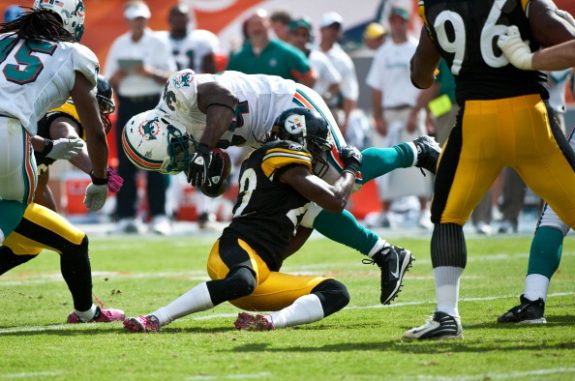 The last time they met in Pittsburgh, it was the mud bowl. Sunday at Heinz Field, it may be the snow bowl. The Dolphins always seem to bring something odd with them, and when the Steelers and Fins meet for a huge week 14 game Sunday, a lot will be on the line.

For the Steelers, a loss and they are all but officially done for any hopes of the postseason. At 0-4 and 2-6, not many thought they had a shot anyway, but a run that saw them win 3 straight got them back in the race.

A loss in Baltimore last week puts them at 5-7, and another loss and the best they can do is go .500.

For Miami, they are very much in the race at 6-6, and have had to overcome a lot on and a lot off the field this year to get to this point.

It should be an interesting game, and today we take a look at the three keys as well as who we think will walk out of the Steel City with a win.

1. Don’t Let Wallace Celebrate – Former Steelers WR Mike Wallace has 12 catches for 209 yards and two touchdowns over the last two games after grabbing just one through the first 10. He’s been better for Ryan Tannehill lately, and says he has a special celebration for tomorrow should he catch a TD. Tannehill has been more comfortable with Wallace as of late, and it will be up to Ike Taylor to make sure that Wallace doesn’t have a shot to do that dance and show up his former team.

2. Use The Elements – The Steelers will have a big edge in terms of the conditions at Heinz Field Sunday, as it will be cold, there’s snow in the forecast, and wind. The Dolphins don’t usually have to tend to these types of conditions down in Miami, and won’t have a clue as to how to handle them. It’s time for those old-school Steelers players and their fans to rise up and hold the Fins in check as they will want that bus to be nice and warm as they get back on their plane to sunny South Florida.

3. All or Nothing – The Steelers have to play Sunday and the next three games with a sense of nothing to lose. They all season have fallen short with the games on the line, with maybe an exception in the first Ravens and the Lions games, but for the most part haven’t been as good as many thought they would be. With that, it’s time to throw some caution to the wind, play with every ounce of the playbook and energy they have, and do whatever they can to get out with a win to get to 6-7, doesn’t matter if it’s one point or 20.

Prediction: Snow and cold in the forecast for the game in Pittsburgh Sunday gives the Steelers and edge, and with a returning LaMarr Woodley and a hopefully somewhat healthy Le’Veon Bell and David DeCastro, the black and gold should win this game. They need to pressure Ryan Tannehill, and make sure to not allow the big plays like the early pass play that got the Ravens going last Thursday. Overall I think Big Ben and the offense will do enough for 17 points, and on a day when the weather will rule, the Steelers will win. Pittsburgh 17 Miami 10