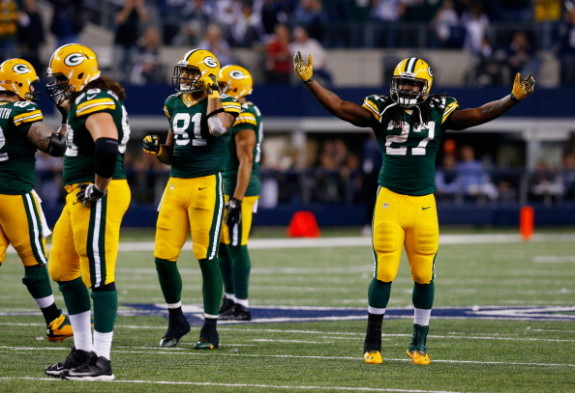 It’s been an odd season already, and that up and down campaign for the black and gold will continue Sunday as they head to Green Bay to take on a Packers team that overcame a huge deficit Sunday in Dallas for a big last second win.

The Packers have had to play without stud QB Aaron Rodgers the past few weeks, and are still 7-6-1, good for second in the NFC North.

It’s unknown if Rodgers will go this week vs the Steelers, as he will try and practice on Wednesday. For now, it’s Matt Flynn again under center for the Pack.

Let’s take a look at Packers, and what they will bring to the table Sunday against the Steelers.

1. There’s the Beef – The Packers have a big, physical offensive line that averages 310 pounds, and they like to push opponents around to help open holes for running back Eddie Lacy, who has been a big factor for Green Bay in his rookie season. They also keep Matt Flynn or whoever is at QB pretty clean, so the Steelers need a plan to find a way to get to the QB and hold Lacy down.

2. Big Plays Allowed by the Pack – Green Bay’s defense has had issues much like the Steelers this season, allowing seven plays of 40 or more yards this season. They were torched last week by the Cowboys has they built a huge lead before their offense finally started to beat up the worst D in the NFL in the Cowboys. This might be a game where the offense finally starts to have some big downfield plays.

3. They’re Special, They’re Not So Special – The Packers special teams are all over the place, awful on kickoffs and very good on punts. Heading into Sunday the Pack is 30th in the NFL on kickoff returns and 32nd in kick coverage. Punting is a different story, as Micah Hyde is third in the league with a 15.4 yard per return average, and can go the distance. It will be interesting to see what special teams unit wins the battle Sunday.