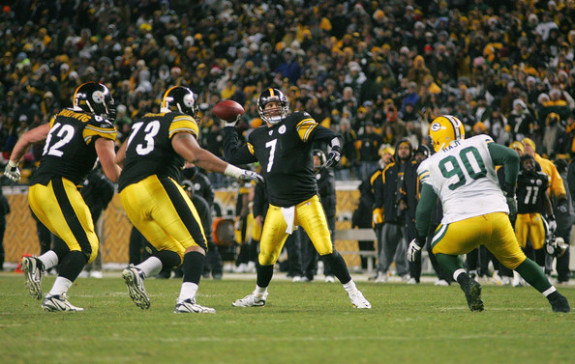 It was a wild late afternoon game between the Packers and Steelers at Heinz Field back in 2009, as the Steelers were coming off a skid that killed their shot at a playoff birth after winning Super Bowl XLIII the year before.

For Green Bay, they had a solid offense in 09, but their defense was awful. This game went back and forth all day, but in the end it was a wild play with no time left that won it for the Black and Gold.

So many times this season the Steelers defense has cost them in the fourth quarter. Sunday at home in maybe the wildest game in Heinz Field history, Ben Roethlsiberger and the offense bailed them out. Led by a frantic final drive down 36-30, the Steelers pulled out their most memorable win of 2009, winning on the final play of the game to top the Green Back Packers 37-36 to end their five game losing streak.

The game-winner came when Roethlisberger threw a perfect pass to the end zone from the Green bay 18 that Mike Wallace pulled in, looking like Santonio Holmes last year in the Super Bowl. The feet were down, and the play was ruled a catch and a score, giving the Steelers the win after Jeff Reed nailed the extra point with no time remaining.