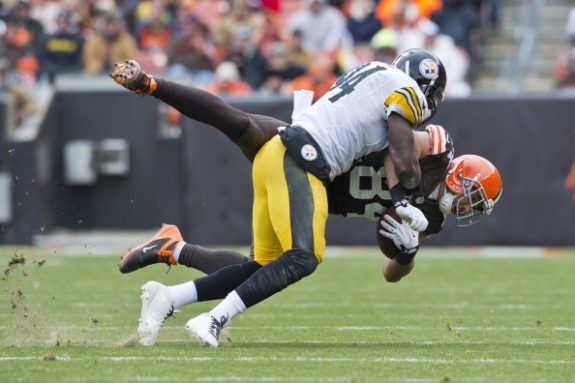 The Steelers have a shot at the postseason, which couldn’t be said last season at this time, and oddly enough the team got off to a much worse start at 0-4 then last season, when the collapse happened near the end of the season.

No matter how you slice it, the Steelers have to take care of business first at home, beating a Browns team they have dominated more than any other over the last 21 seasons, and also beat soundly earlier this season in Cleveland.

So today we do our final regular season preview of the season, with hopefully at least one more to come. We shall see.

1. Quick Start – The Steelers offense has been very, very good in the second half of the season, and has put up 30 points in the last two games, and should be able to do it again Sunday. The Browns defense has been pretty soft the last half of the season, and the Steelers offense needs to not mess around, they need to start, start fast and get going early.

2. Keep Gordon At Bay – The Browns best, and most productive player on offense is wide out Josh Gordon, and last time around he had a lot of catches and yards in garbage time, 14 for 237 yards – 166 of which came once Brandon Weeden relieved the knocked out Jason Campbell. Gordon is by far the best playmaker this team has, and while the Browns run game is basically null, the team has to just make sure that Gordon doesn’t get in an early groove and start making big downfield plays for the Browns.

3. Turnovers – It’s a key just about every week, but one way the Browns can stick around in this game is by the Steelers playing sloppy, and giving the Browns chances by turning the ball over. The Steelers offense nearly gave the game away last week with the fumble inside their own 5 in Green Bay, but recovered and wound up creating a turnover of their own to win the game 38-31. It shouldn’t be nearly as close this week, and a few defensive turnovers of their own would help making sure this is the blowout it should be.

Prediction – While the Browns are talking tough about killing the Steelers playoff chances, I don’t buy it and just can’t see this thing being close by 4pm. The Steelers are playing (sadly enough) some of their best ball on offense, and should be able to put up at least 24-30 points on a struggling Browns team. The Browns offense has not been very good either, and the Steelers D should be able to keep them to 10 points or less. In other words, playoffs or not, the Steelers will wrap up the year as same as 2012 – .500 (8-8). Pittsburgh 27 Cleveland 9