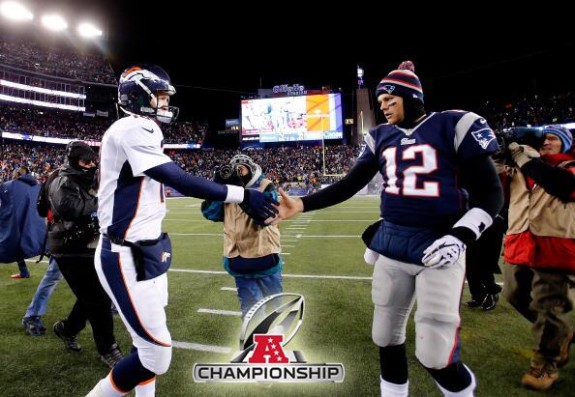 This weekend we’re down to the Final Four in the NFL as the Broncos host the Patriots in the AFC Title Game, and over in the NFC it’s the Seahawks and the 49’ers, who are in the title game for the third straight season.

Today we take a look at the two games and pick the winners who we think will wind up in Super Bowl XLVIII in a few weeks in New Jersey.

New England at Denver – There’s one stat that has convinced me to go with the Pats in this game, and it’s this one – Tom Brady is 7-0 against Jack Del Rio led defenses, throwing for 1,771 yards, 17 touchdowns and zero interceptions. The Broncos D played well last week against the Chargers, but this is a different team and a different game, and as usual it’s time for the Pats to step up and finish. Brady finds a way to once again outplay Peyton, and the Pats will again be playing for a title. New England 34 Denver 27

San Francisco at Seattle – San Francisco simply has not played well when taking the field in Seattle, getting beat up badly earlier this year and last year as well. While the Niners will have the experience, the Seahawks to me have the momentum, being more physical and playing well enough last week to take care of the Saints. Russell Wilson and Marshawn Lynch will have an impact on keeping the Niners D on their toes, and in the end I can’t see Seattle dropping this in front of the 12th man at home. Seattle 17 San Francisco 13