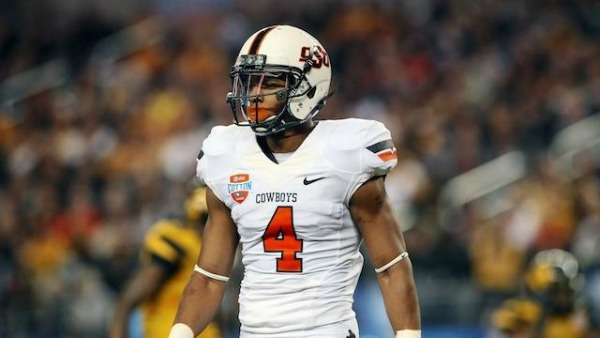 It is a shock to no one that the Steelers will be looking to address the secondary early in the 2014 NFL Draft. Now that it is Combine week in Indianapolis, the Steelers will start meeting and talking to prospects. According to Jim Wexell, the Steelers will meet with cornerback Justin Gilbert from Oklahoma State, on Sunday night.

Several across the country have made their case that the Steelers could do way with safeties Ryan Clark and Troy Polamalu, along with cornerback Ike Taylor, however, the black and gold are not expected to let all three walk away. The Steelers will most likely ask Taylor to take a pay cut, and the Steelers would like to see Polamalu retire with the team. For the 34-year-old Clark, his time looks like it is over with the Steelers.

The aging secondary of Pittsburgh’s needs some youth, which is where the draft will come into play. Gilbert is a 6’0″ 200-pound prospect that had an impressive 2013 season with his Alma Mater — he earned first-team All-Big 12 honors, along with a consensus All-American pick. Gilbert is considered the second best cornerback behind Michigan State’s Darqueze Dennard.

Dennard was the 2013 Jim Thorpe winner and measures just an inch under Gilbert. Both prospects are considered to be big, strong, and athletic.

It may be hard for either one of them to last until the 15th overall pick, which is where the Steelers are scheduled to pick. The Steelers aren’t known for making many early trades in the draft.

The Steelers will bring in numerous prospects from now until draft day. We will keep note of them all.