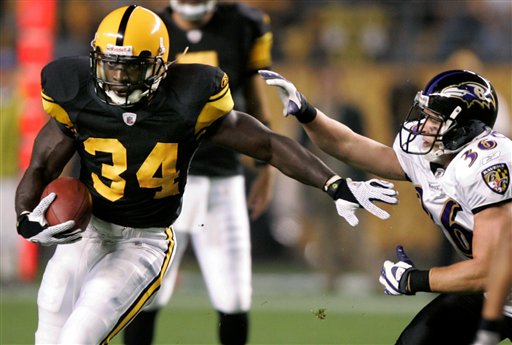 Former Steelers running back Rashard Mendenhall has decided to hang up his cleats according to ESPN, as he will not come back to play in 2014.

Mendenhall, now with the Cardinals, had a tough go of it in his first season in Arizona, rushing for just 3.2 yards per carry despite the Cardinals and former Steelers OC Bruce Arians going 10-6.

He was a former first-round pick of the Steelers, rushing for 4,236 career yards and going for 39 touchdowns in six NFL seasons.

Mendenhall tore his anterior cruciate ligament in 2011, and he hinted at retiring in a Huffington Post blog post called “The Vision.”

“The journey I envisioned is the two years of rebuilding that would follow,” Mendenhall said. “And as I write this, today is the day that the journey is over and I am fully at peace. Eagerly looking to a new way, which lies ahead.”

Mendy’s best NFL season came back in 2010, when the Steelers got to the Super Bowl behind a solid year for the back, as he went for 1,273 yards and 13 touchdowns.

Sadly, he had a huge blunder in the Super Bowl XLV loss to the Packers, fumbling in the fourth quarter at a key moment in which the Steelers were driving for the go-ahead score.