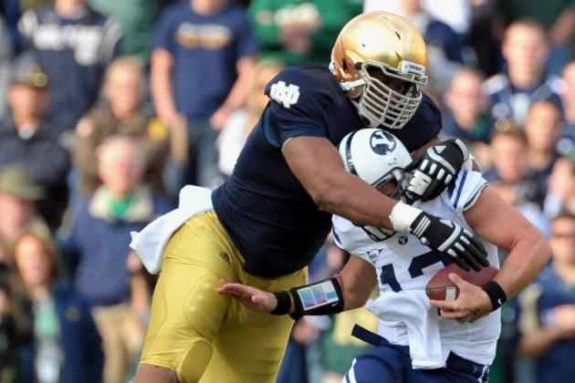 While it isn’t unusual for rookies in the NFL to have a learning curve by being mentored by veterans, three Pittsburgh Steelers draft choices in 2014 are expected to be in competition for immediate impact on the team.  Rookie mini-camp is underway, and already Stephon Tuitt, Martavis Bryant and Ryan Shazier are being groomed to take on a leading role.

Immediately after the draft, head coach Mike Tomlin admitted that some new faces could earn starting positions.  “It’s not something that’s going to be given to them,” said Tomlin.  “They’ll be given an opportunity to earn it.  But I do believe that within this group there are some guys that are very capable of doing just that…I’m not going to prejudge and go into it with any preconceived notions. I’ll let those guys sort themselves out on the grass of Latrobe like we always do.”

Tuitt (pictured above) was a top-notch choice for the Steelers.  Prior to the 2014 draft, the Steelers had only two defensive linemen on their roster who had started games – Cam Heyward and Steve McLendon.  The Steelers brought in veteran free agent Cam Thomas to bolster the defensive line, but Tuitt will likely be instructed on transitioning how he performed at Notre Dame into NFL readiness immediately.  As for the depth chart, there are four guys who are starting to look more like players who will push Tuitt instead of real producers – Brian Arnfelt, Nick Williams, Hebron Fangupo, Al Lapuaho.

“I can’t wait to get to work and start producing and helping the team,” said Tuitt earlier this week.  “People have made comments that make me aware it’s a business, a job…I am 20 years old, I am loving life and I am part of the Steelers.  I am just excited to play some football.”

Bryant is in a position at wide receiver where no one has been slated on the starting roster outside of Antonio Brown.  Brown didn’t expect to get a start in 2011, but he posted 1,108 yards on 69 catches and only started three games that year.  At 6 foot 4 inches, Bryant is the tall wideout the Steelers have been lacking on their roster since the departure of Plaxico Burress.  Bryant could improve the Steelers’ red-zone efficiency in 2014 as well.  He will compete with Markus Wheaton and Derek Moye as well as undrafted rookie free agents as mini-camp and training camp proceed.

Wide receivers coach Richard Mann described the role he feels Bryant will fill in the roster by specifically talking about his skill set and how he fits into the offensive scheme.  “A lot of times everybody knows where the ball if going to go and there’s nothing they can do about it if you have a mismatch,” said Mann.  “That’s what we think we have here [in Bryant] with the reach that he has, the wingspan…Hopefully, what we expect is (Bryant) can pick up some of that slack [after the Steelers lost Jerricho Cotchery].  We go to work and teach him what he needs to learn, and we’ll be fine.”

As for mini-camp, Bryant said, “It was a first-time experience for me…I just need to go and watch film and work on getting better.”

Tomlin may have said it best nearly right after Shazier’s name was announced.  “(Shazier) is a guy who will be on his feet, making sideline-to-sideline tackles associated with today’s football.  What we needed was a defensive playmaker.  He fits the bill in that regard.”  Projected to be the ‘mack’ linebacker, working from the inside, Shazier will be pushed and make big plays.

Shazier is already being indoctrinated into the system at mini-camp.  “The information is flying at you,” said Shazier.  “You just learned a little bit of it not too long ago and now you are going out there trying to digest it and play…It’s good to have this time.  The veterans know what they are doing.  We are out here trying to learn and get a little grasp of everything before we are out there with the older guys.”