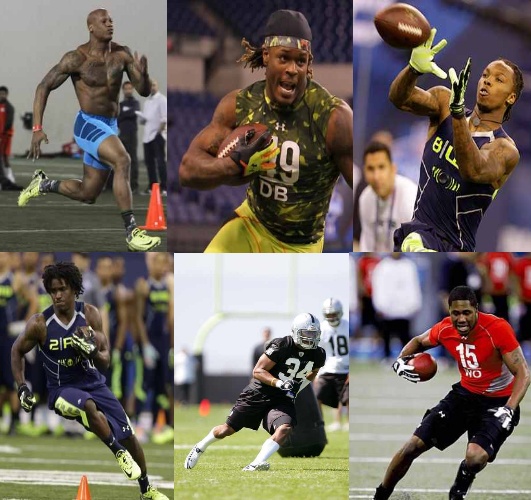 The Pittsburgh Steelers didn’t do what many NFL insiders thought they would do with the 2014 NFL Draft.  Some have claimed the Steelers avoided drafting for ‘need’ by making the selections they did in the order the draft went along.  One thing the Steelers did was make Warren Sapp’s comments about the Steelers showing their age and being slow a non-issue for now.  Head coach Mike Tomlin and the rest of his coaching staff are happily showing off how much quicker the team has become at nearly every position since 2013.

With the addition of Ryan Shazier (linebacker), Dri Archer (RB/WR/KR) and Martavis Bryant (WR) in the 2014 draft, the Steelers added three of the fastest college players at the NFL Scouting Combine and workouts.  Shazier, picked at number 15 overall, was clocked in the 40-yard-dash at 4.38 seconds.  Archer, the fastest player at the combine in 2014, ran an official time of 4.26 in the same event.  Bryant, in the top 15 of the quickest college prospects in Indianapolis, ran a 4.42 time.

Linebackers coach Keith Butler is impressed with Shazier and said, “Sub 4.4 for a linebacker is moving.  I like him a lot.  You try to fit a need, and we though with him we couldn’t pass him up when he was there.  He had that type of speed that you can’t pass up.  He’s going to make us immediately faster on defense…”

“I think you cover speed obviously, but it’s football not a track meet,” Tomlin said. “If you get a capable football player who happens to be fast, it’s an asset. Speed players that we were able to acquire in this draft fit the bill in that regard. They are football players first who happen to be extremely fast.”

The Steelers used free agency to acquire two more speedy players: Mike Mitchell (DB) and Darrius Heyward-Bey (WR).  Bey clocked a 4.30 in the 40 in 2008 and Mitchell ran a 4.36 the following year.  Both played together as Oakland Raiders.

Defensive back Shamarko Thomas ran a 4.37  and receiver Markus Wheaton ran a 4.45 in 2013 and are both expected to step things up in their sophomore seasons.