Steelers: Gaining the outside edge 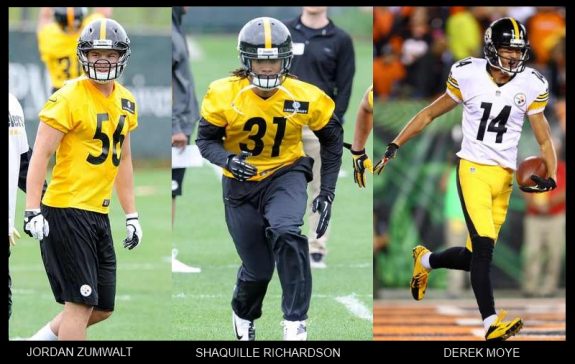 Mini-camp for the Pittsburgh Steelers this year has major competition at outside linebacker, cornerback and wide receiver.  Some of the players at these positions have much to gain.  It could be the difference between starting or not playing. Mandatory mini-camp says a lot about the players, especially before training camp.

Sixth round pick (in 2014 NFL Draft) Jordan Zumwalt has already impressed the Steelers with his ability to play ILB and OLB. “He is a born Steeler,” draft analyst Mel Kiper said. Zumwalt brings a toughness  and aggressiveness that the Steelers crave. In mini-camp, Zumwalt’s ability to cover will be crucial. The NFL is now a passing league. Linebackers must be able to run, tackle and cover, especially in the mid-secondary, as well.  Zumwalt will compete with Chris Carter who was drafted in the fifth round (162 overall) in the 2011 NFL Draft out of Fresno State.

Playing DE in college,  Carter was switched to OLB.  His strength was rushing the passer off the edge. In two starts he  has yet to record a sack. Carter’s strength so far has been special teams. With 14 career tackles, his stats are not overwhelming.  Carter’s knowledge of the playbook will give him a advantage over Zumwalt for now.  On the positive side, Carter has been the top backup at OLB for the Steelers in his three seasons in the NFL.

“We like 6’2″, 25- pound guys, who can run and hit” Tomlin said concerning Steelers linebackers. At 6’1″, 248 pounds, Carter is close enough.  Entering his fourth season, Carter will need to improve as a pass-rusher to make the team.

Shaquille Richardson has a great opportunity to prove himself in mini-camp. With cornerback Cortez Allen entering the final year of his contract, Richardson will be expected to develop quickly. Richardson must show his ability to understand run-support and different types of coverages.

Cortez Allen is projected to start at right cornerback opposite Ike Taylor.  At 6’1″, 196 pounds, the elite size is there. With 75 tackles,2 interceptions,and 3 forced fumbles, Allen has shown flashes of play-making ability. Allen must show that he is fully healthy the rest of mini-camp.  Cornerback William Gay has plenty of starting experience to step in if needed. Allen’s skills are there and he must now put it all together to keep his starting position.

Justin Brown is in serious competition with Darius Heyward Bey and Derek Moye at wide receiver.  All three are at least 6’2″, making all three a threat in the red zone. Moye and Brown worked out in the offseason with Ben Roethlisberger to develop a rapport. Bey’s 4.26 speed (in the 40)  gives him a time advantage over Brown and Moye. Moye’s touchdown catch in Week Two vs. the Cincinnati Bengals and more extensive playing time gives him the biggest advantage at being a starter between the three. Brown, who spent last season on the practice squad, is looking to use his improved route-running skills to impress the coaches.

Contract extension or not, Worilds busy at Steelers mini camp
Striving to be the ‘next man up’