Striving to be the ‘next man up’ 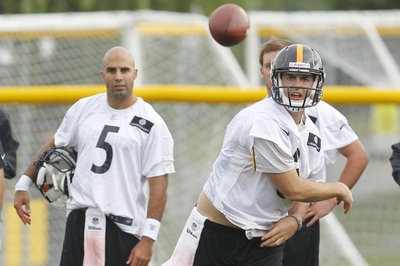 Bruce Gradkowski and Landry Jones are in competition with each other to be the top backup at quarterback for the Pittsburgh Steelers behind Ben Roethlisberger. Both need to impress at training camp in many ways. They both need to do anything possible to win the number 2 spot.  Both were involved in minicamp and the showdown could just be underway.

Gradkowski was the top backup to Roethlisberger last season. Gradkowski has 11 starts under his belt. Those 11 starts gives him a advantage over the zero starts Jones has. Gradkowski’s experience in the west-coast offense as a former QB for the Oakland Raiders comes in handy as well.  Gradkowski is also known for his mobility in the pocket, something Jones is not. The Steelers know first-hand what Gradkowski is capable of.  In week 13 of the 2009 NFL season, Gradkowski completed 20 of 33 passes for 308 yards and 3 touchdowns against the Steelers. Gradkowski showed his mobility on one play by scrambling out of the pocket and throwing the game winning 11-yard touchdown pass to Louis Murphy. Gradkowski must show his ability to produce in the spread offense in Pittsburgh. With many big and small speedy receivers in camp this year, it’s safe to say the passing game will be used very much this season. Gradkowski has the stats and experience to to be the number two quarterback, but Jones is up and coming.

Jones certainly has the collegiate history to suggest that he has what it takes to be a backup in the NFL and possibly even more. Jones passed for more than 16,646 yards. That total is the third most all-time in NCAA history. His 123 touchdowns should not be overlooked either.  Jones has shown he understands the spread offense – evidence of the success he had at the University of Oklahoma. Jones displays a quick release not matched by many. Jones’ ability to read defenses under center in training camp will be crucial to him.

Steelers: Gaining the outside edge
Sean Spence: Coming Back Greater Than Before