Brendon Kay: Scrambling Into Competition One Pass And Rush At A Time 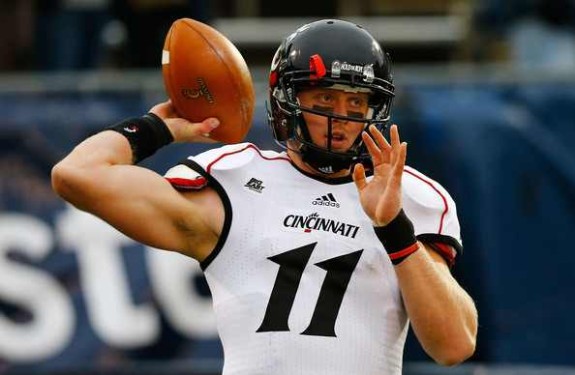 Brendon Kay is heading into training camp as the number four quarterback on the Pittsburgh Steelers depth chart. Usually walk-on quarterbacks don’t have much of a chance, but this year Kay has a great chance to advance for several reasons. Kay brings much momentum into training camp. In his senior season at the University of Cincinnati, Kay passed for over 3,000 yards with 22 touchdowns and only 10 interceptions. Kay standing at 6’4″, 228 pounds, clearly has the size the Pittsburgh Steelers crave at quarterback. Kay ran a 4.64 in the yard dash before being signed as an un-drafted rookie free agent on May 10. The mobility is there for Kay which will only help his chances. To top it all off scouts praised Kay for having excellent arm strength. Now it comes down to beating his competition; a player with great success from the University of Oklahoma

Landry Jones is the man Brendon Kay must out-perform in order to make the team. Last season, Jones struggled in training camp and the preseason. In this offseason, however, Jones has shown improvement. With Jones having a year of  experience in the Steelers offense over Kay, Jones at this point and time, has a better understanding of the playbook. Both Kay and Jones must continue to improve to read defenses from under center.

With many Pittsburgh Steelers fans disgruntled with Jones from the moment he was drafted in 2013, Kay has a great opportunity to show he is better suited to back up Ben Roethlisberger and Bruce Gradkowski. After playing very little in his first two collegiate seasons, Kay displayed a never-quit altitude and finally became a starter for his junior and senior seasons.  If he makes the team, Kay will have to wait for his opportunity to shine, but it won’t keep him from giving Jones a run for the third spot at quarterback.

Played in 30 games with 16 starts over his final two seasons at Cincinnati, completing 354-of-541 (65.4%) passes for 4,647 yards.  Carried the ball 129 times for 503 yards and eight rushing touchdowns.  Played high school football at Marine City High (Marine City, Mich.) for head coach Tony Scarcelli where he was a three-year captain.  Playing quarterback, kicker and punter, was named Macomb Area Conference Gold Division MVP his junior and senior seasons, leading his team to the 2007 Michigan Division 4 State Championship game.  Selected to the Detroit Free Press Dream Team and Lansing State Journal Catch 22 honors…a Detroit News All-Metro East honoree twice.  Was recognized as Post Huron Times Herald Player of the Year twice.  Played in the 2007 Michigan East-West All-Star game.  As a senior…connected on 133-of-202 passes for 2,083 yards and 27 touchdowns, adding 561 yards and 15 touchdowns on the ground.