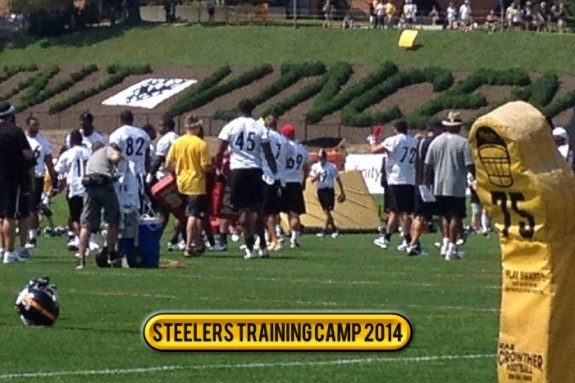 For Pittsburgh Steelers fans, the arrival of annual training camp at Saint Vincent College means football is just around the corner. At times, the arrival of players has taken on a surreal air, but not this year. With so many new faces entering camp, the Steelers players appear to have the season on their mind rather than headlines. Saturday marks the first official day of camp.

Turnovers on the roster has been key during the off-season. With the departure of many of familiar and veteran faces, Steelers fans are getting their first glimpse in person of what the 2014 team may look like during the regular season. The lone departure from the ‘norm’ was an appearance by 34-year-old Ike Taylor who came wearing a camera that allowed him to take video of the media who had their cameras aimed at him.

When asked about camp and the upcoming season, Taylor said, “It’s a good feeling. From the OTAs, to the mini camp, to right now…this team with all these young guys and the energy, it’s like the 2004, 2005 feeling.”

One of the first players to check in on Friday was center Maurkice Pouncey. After missing the 2013 season with a knee injury, Pouncey expressed excitement over being back in Latrobe. “It’s like my rookie year all over again. I woke up this morning with more jitters than ever.” Pouncey went on to add, “I missed the whole (2013) year. I am excited to be back out there…after so much success at the beginning [of my career] and it’s all taken away from you. It’s like your first day back on the football field. To get back out here with the guys is a great feeling for me.”

During the offseason, young safety Shamarko Thomas spent time training with Troy Polamalu, and it started with a text according to Thomas. “I texted him and told him I want to be great,” said Thomas. “He explained what it takes to be great. He said you have to show by actions first, by being mature and how you carry yourself off the field.” Thomas got an experience many haven’t had in that Polamalu typically works out on his own during the offseason. “It was an amazing experience,” admitted Thomas.

Linebacker Sean Spence is nearly ecstatic to be back at training camp after missing the past two seasons with a knee injury that was serious enough to leave many, including Spence, wondering if he’d ever play in another football game. “Last year was full of a lot of down moments, sad times,” said Spence. “I was away from football for my second year in a row. This year I am full of job, around the guys, taking advantage of every opportunity.”

Monday will be the first day in which the Steelers players will put on pads in practice.

Note: The Steelers announced Friday that safety Mike Mitchell and running back Alvester Alexander have been placed on the Physically Unable to Perform List (PUP) to begin camp. 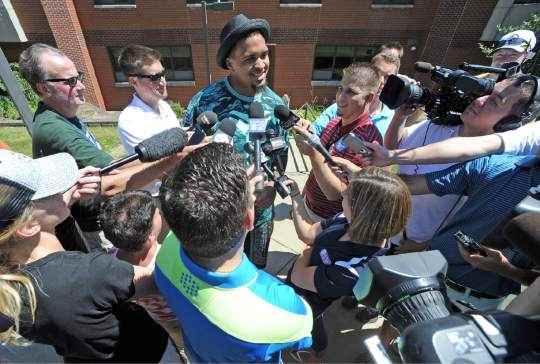 (Article originally posted on Examiner.com under a different headline)

The Next Man Up Starts Now In Pittsburgh Due To Mike Mitchell Injury
Between the Hashmarks: Steelers ready to take training camp to next level