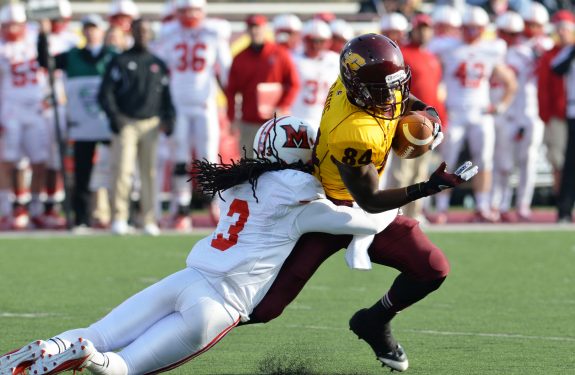 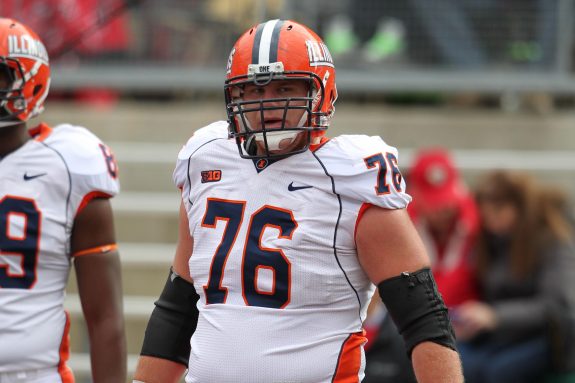 The Pittsburgh Steelers announced on Monday that they have brought in Dayonne Nunley (cornerback) and Graham Pocic (OL).  To make room on the roster, the Steelers released James Shaw (WR) and waived injured offensive lineman Bryant Browning.

Nunley (#3 in above photo) was an undrafted rookie free agent this year out of the University of Miami (Ohio).  While he did participate in the Steelers’ 2014 rookie mini-camp as a tryout, he was released before OTAs.  During his senior season (2013) at Miami of Ohio, Nunley started in all 12 games he played in, making 88 tackles, 2.5 tackles for a loss, one interception and broke up 13 passes.  Nunley was named first-team All-MAC.  In 2012, Nunley earned first-team All-MAC honors and recorded 63 tackles and three interceptions.  During his junior season, Nunley also returned nine kickoffs for 197 yards.  In 2011, Nunley started all 12 games for the RedHawks, recording 58 tackles, including eight tackles-for-a-loss and led the team with three interceptions.  Nunley paced Miami (Ohio) kick returners by averaging 23.0 yards-per-return on 16 run-backs.  During his freshman season (2010), Nunley finished  sixth on the team in tackles with 51.  He and teammate Evan Harris tied for fifth in NCAA statistics with six interceptions apiece.  Nunley earned Defensive MVP honors for exceptional play in the GoDaddy.com Bowl game vs. Middle Tennessee State, returning an interception 52 yards for a touchdown to make it the longest in Miami bowl history.

Nunley will wear number 37 for the Steelers.

At 6-feet, 7 inches, Pocic is an imposing offensive lineman prospect.  Pocic was originally signed by the St. Louis Rams as an undrafted rookie free agent on July 29, 2013, out of the University of Illinois.  Pocic was then picked up by the Chicago Bears in 2014, but did not make the final 53-man roster.

Pocic earned PrepStar Magazine Dream Team honors in high school as well as being named to the Chicago Sun Times All-Area team, first-team All State honors by the Chicago Tribune, four-star recruit by Rivals.com, Rivals 250 team, First-team All-State by the Champaign News-Gazette, four-star recruit by Scout.com, Midwest Hot 100 list by Scout.com.  Pocic was ranked as the 16th best offensive tackle in the nation by Scout.com and fifth-best player in the state of Illinois by Rivans.com.  Pocic had 26 scholarship offers before signing with the Fighting Illini at the University of Illinois.

In 2012, Pocic’s senior season, he made eight starts at center and two starts at right tackle, earning an honorable mention All-Big Ten selection.  Pocic was voted the 2012 team captain, named team’s Outstanding Offensive Player and was named to preseason watch lists for the Outland and Rimington Trophies.  Pocic was named a preseason second-team All-Big Ten selection by Phil Steele and Offensive MVP of 2012 Spring Practice.  In 2011, Pocic started at center in all 13 games, earning the Illinois Faculty Award for Exemplary Leadership in community, classroom and on the field.  As a sophomore (2010), Pocic earned an All-Big Ten honorable mention and was placed on Phil Steele’s third-team All-Big Ten while playing at center.  As a redshirt freshman (2009), Pocic helped the Illinois offense rank 18th in the NCAA in rushing and second in the Big Ten.  Pocic redshirted the 2008 season.

Pocic will wear No. 64 for the Steelers.